No Need for Strangers to Ensure Security of Hormuz Strait: Iranian Commander

TEHRAN (Basirat) : Commander of the Islamic Revolution Guards Corps (IRGC) Navy Rear Admiral Ali Reza Tangsiri said that Iran is responsible for protecting the security of the Strait of Hormuz and that no stranger is needed in the region. 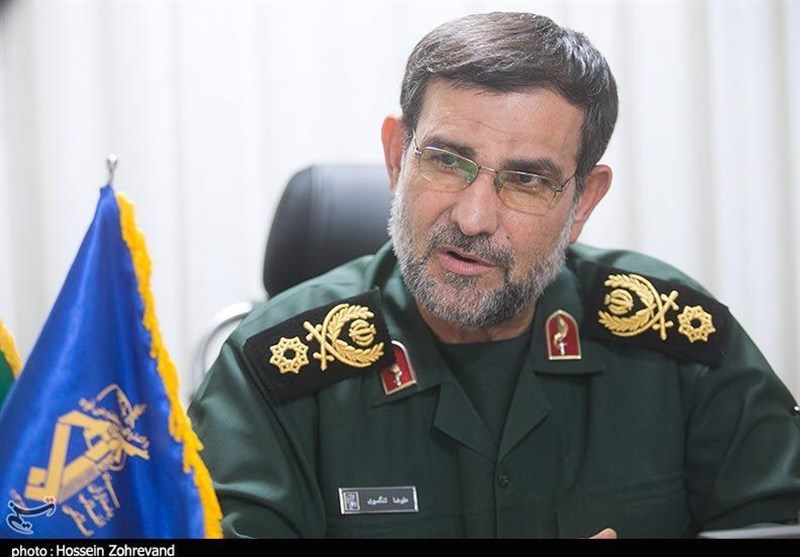 “The security of the Persian Gulf is an important issue for Iran and we believe that international maritime traffic should remain international,” Rear Admiral Tangsiri told Lebanon’s Arabic-language al-Mayadeen TV network.
He emphasized that Iran has ensured the security of the Strait of Hormuz for decades and the presence of countries outside the region has hampered the security.
The US and Britain are creating various scenarios to justify their presence in the Persian Gulf, the commander added, referring to the US’ recent decision to form a maritime coalition in the region.
“We, in the IRGC Navy, are responsible for ensuring the security of the Strait of Hormuz and Persian Gulf and there is no need for strangers (here),” Rear Admiral Tangsiri went on to say.
In similar remarks on Saturday, Brigadier General Ahmad Reza Pourdastan, a high-ranking Iranian commander and former Army Ground Force chief, highlighted some major countries’ refusal to join the US-led military coalition in the Persian Gulf, saying the alliance has failed even before its formation.
Some major countries, including Germany, Spain, and Japan, have said they will not participate in the US-led naval mission in the Strait of Hormuz.
The developments come against the backdrop of increased tensions between Iran and the US after the Islamic Republic shot down an advanced US spy drone over its territorial waters.
The Islamic Revolution Guards Corps (IRGC) said on June 20 that a US spy drone that violated the Iranian territorial airspace in the early hours of the day was shot down by the IRGC Aerospace Force’s air defense unit near the Kooh-e-Mobarak region in the southern province of Hormozgan.
The intruding drone was reportedly shot by Iran’s homegrown air defense missile system “Khordad-3rd”.
Later on the same day, US President Donald Trump said he had called off a retaliatory attack on a number of targets in Iran and said that he was ready to speak with Iranian leaders and come to an understanding that would allow the country to improve its economic prospects. “What I’d like to see with Iran, I’d like to see them call me.”
“I look forward to the day where we can actually help Iran. We're not looking to hurt Iran,” Trump added.
However, on June 24 Trump announced new sanctions against top Iranian officials, including the office of Leader of the Islamic Revolution Ayatollah Seyed Ali Khamenei, Iran’s foreign minister, and senior commanders of the IRGC.