TEHRAN(Basirat): A group of Iraqi mawkib organizers who host and serve the pilgrims of Imam Hussain’s shrine during Arbaeen met with the Leader of the Islamic Revolution—Ayatollah Khamenei—at the Hussaynieh of Imam Khomeini (r.a.) this morning (Wednesday), September 18, 2019. 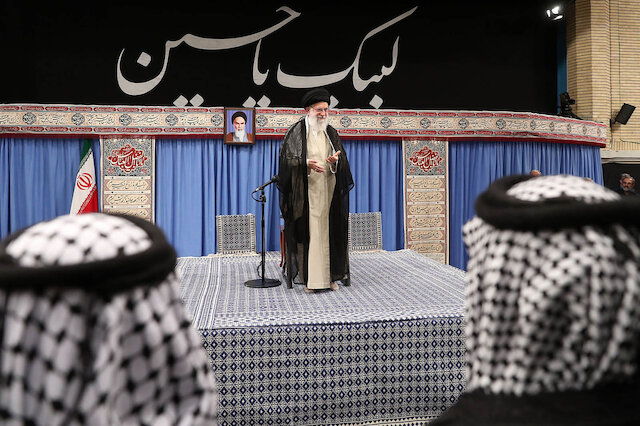 In this meeting, Ayatollah Khamenei thanked the sincere Iraqi people and officials who dedicate themselves to serving the pilgrims during Arbaeen and asserted: I express my and the Iranian nation’s heartfelt gratitude to you the mawkib keepers and organizers, who manifest utmost benevolence and compassion during Arbaeen; to the great Iraqi nation; to the Iraqi officials who prepare the grounds and security; and especially to the honourable religious scholars and Marja's in Iraq who have prepared the ambiance of pilgrimage and brotherhood among different groups of people and the two nations.

The Supreme Leader of the Islamic Revolution praised his Iraqi guests for their compassion and love of Imam Hussain (a.s.) in welcoming and hosting the pilgrims and held: What we hear about your tender attitude, dear brothers, in the mawakib located on the path [of Arbaeen march], toward the pilgrims of Imam Hussain’s shrine is unique in the world; just as the walk of Arbaeen is unique throughout history.
His Eminence described the Iraqi hospitality inspired by the love for Imam Hussain as matchless in the world and said: You manifested the Islamic and Arabic benevolence in your attitude, by love of Imam Hussain (a.s.), you wash the feet of the pilgrims, and give them massages when they are extremely tired, and you provide them with beds. This love for Imam Hussain (a.s.) is an extraordinary phenomenon, with no similar example.
Considering the Arbaeen walk as an extraordinary phenomenon, Imam Khamenei applauded the annual million march commemorating the 40th day after the martyrdom of Imam Hussain and his 72 companions and maintained: Arbaeen march is an extraordinary phenomenon not only in our era but also throughout history; we cannot find such a gathering and movement that takes place every year more enthusiastic than the previous years.

The Supreme Leader declared that Imam Hussain belongs to the whole of humanity and cannot be exclusively attributed to one sect or denomination, stressing that: Imam Hussain (a.s.) belongs to humanity. We, the Shias, are proud to follow Imam Hussain, but Imam Hussein does not exclusively belong to us. Shias, Sunnis and all the people are under the patronage of Imam Hussain. Even non-Muslims take part in this massive march, and the phenomenon will continue to grow.

His Eminence urged everyone to make efforts in order to bring more vitality and productivity to the Arbaeen phenomenon and said: We should do our best to organize the Arbaeen ceremony more fruitful and more spiritual than ever. The intellectual and cultural leaders should plan for the great ceremony.
Ayatollah Khamenei stressed that every Muslim’s goal should be to found an Islamic civilization and went on to say: The goal of every Muslim must be creating the novel Islamic civilization. Islamic nations have great capacities, which if exploited, the Islamic Ummah can reach an apex. Founding the Islamic civilization is our ultimate goal.

Expressing hopes for the future of the great Iraqi nation, Ayatollah Khamenei asserted: The honourable Iraqi people can make their country achieve utmost dignity. These potentials should develop and lead to practice. If the capacity of Islamic countries is integrated; if Iran, Iraq, and other West Asian and North African countries come together and join hands, then the Islamic Ummah will show to the societies around the world what Islamic dignity means. Arbaeen march can be a means to this end. Let’s enhance strong ties between Muslim brothers.

Prayers are fulfilled by the tomb of Hussain Ibn Ali (a.s.)
I will do my best to remove obstacles in the way of the youth's scientific progress: Imam Khamenei
Arbaeen March and rise of new Middle East
Nine-Fold Rise in Number of Iranian Pilgrims Visiting Iraq via Mehran Border: Official
Error Report
0