I will do my best to remove obstacles in the way of the youth's scientific progress: Imam Khamenei

Tehran (Basirat) :The Supreme Leader of the Islamic Revolution visited the Exhibition of Knowledge-based Enterprises and Advanced Technologies—called Made in Iran—held in the Hussainiyeh of Imam Khomeini (r.a.) this morning (Tuesday) October 8, 2019. 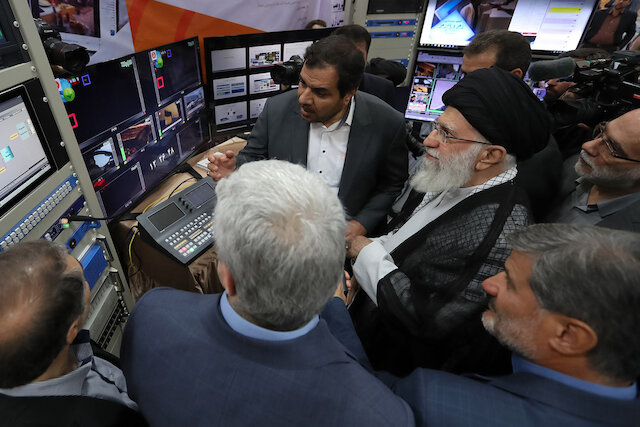 During this two-hour visit, while visiting 30 different booths of knowledge-based companies and discussing with scholars and technology experts, Ayatollah Khamenei was informed about the Iranian experts' and youth's scientific and technological achievements and patented projects.

Among the displayed achievements of these enterprises were domestically developed high-tech medical systems in cancer diagnosis, hemodialysis, robot and neural prosthesis surgery, laboratory equipment, vaccines and advanced medication productions, as well as jet engines and aerial engine designs and manufacturing, power control systems, production of oil and gas catalysts, deep water reconnaissance and drilling services, construction of steel tanks and equipment, advanced optical systems, scanners, measurement, cutting, simulation and processors, manufacturing industrial freeze dryers and video games.
During the visit, the Presiden’s Deputy in Science and Technology, Mr. Sattari, presented a report on the approaches and plans of his department for the transition from the Petro-economy to the knowledge-based economy and said: With the authorization of the Supreme Leader of the Islamic Revolution, the National Development Fund has provided excellent support to the country's scientific sector, which increased the quality and speed of the scientific and knowledge-based projects to make the economy of the country resilient and to counter the sanctions.

Referring to a plan on creating innovation zones adjacent to high potential universities and science centers, the president's Science and Technology deputy stressed that Iran is the largest innovation community in West Asia, and added: There are now more than 4500 knowledge-based enterprises, with 90 thousand billion tomans of income, which have created 300,000 direct jobs.

Source:khamenei.ir
Iran Manufactures Homegrown Dialysis Machine
Being steadfast on the right path improves the country, benefits the world: Imam Khamenei
A legitimate end for the war on Yemen will have positive effects on the region: Imam Khamenei
With their hostile behaviour, Americans made IRGC more dignified: Imam Khamenei
Although we could, we never approached nukes because they’re haram
With utmost seriousness, we will continue reducing our JCPOA commitments: Imam Khamenei
Arbaeen annual march has introduced Imam Hussain(a.s.) to the world: Ayatollah Khamenei
Tags: basirat ، Imam Khamenei ، Exhibition of Knowledge-based ، National Development Fund
Error Report
0