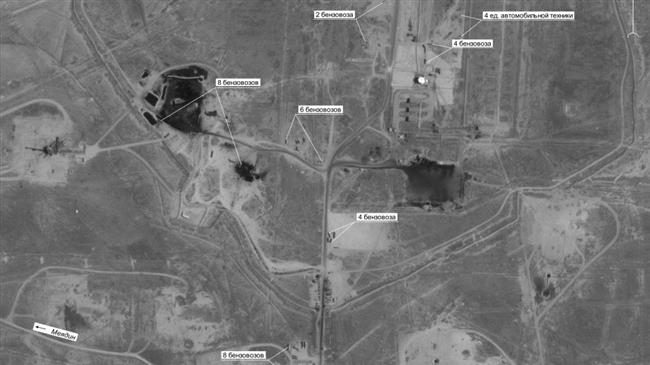 Konashenkov stressed that the convoys were guarded by US private military companies and special operations forces.
"Tank trucks guarded by US military servicemen and private military companies smuggle oil from fields in eastern Syria to other countries and in the event of any attack on such a convoy, US special operations forces and combat aviation are immediately used to protect it," Konashenkov said.

The Russian defense ministry spokesman added that the Syrian oil was extracted with the use of the equipment supplied by leading Western corporations bypassing all US sanctions.
Given that the cost of one barrel of oil smuggled from Syria is $38, the monthly revenue of that "private business" exceeds $30 million, Russia’s TASS news agency quoted Konashenkov as saying.
"Revenues from smuggling Syrian oil arrive at numbered bank accounts of US private military companies and intelligence services through brokerage firms that interact with it," Konashenkov said. "To secure such a continuous financial flow free from control and taxes, the top officials at the Pentagon and Langley will be willing to guard and protect oil wells in Syria from the imaginary ‘hidden cells’ of Daesh indefinitely."

In a major U-turn in US military policy, the White House announced on October 6 that the US would be withdrawing its forces from northeastern Syria, clearing the path for an expected Turkish incursion into the region.
Three days later, Turkey launched the offensive with the aim of purging the northern Syrian regions near its border of US-backed Kurdish militants, whom it views as terrorists linked to local autonomy-seeking militants of the Kurdistan Workers’ Party (PKK).
On Thursday, US President Donald Trump approved of a new plan to keep 500 American troops in northeastern Syria to allegedly protect oil fields and keep them from falling into the hands of the Daesh terrorist group.
The White House is planning to keep 500 US troops in northeastern Syria to guard oil fields there, according to a report.
Pentagon chief Mark Esper confirmed on Friday that the United States plans to strengthen its military positions in Syria's Dayr al-Zawr province in the near future to allegedly prevent terrorists from accessing oil fields.
The United States is studying how to move forces in the region "to ensure the safety of oil fields," Esper added.
Source:PressTv
Iran to host Russian Cultural Days
Iranian, Venezuelan nations’ resistance in foiling US’ plots praiseworthy
Axis of Resistance to Gain Upper Hand in Regional Equations: Velayati
US ready to attack Turkey if necessary, Pompeo claims
US Forces Evacuate ISIL Militants' Spouses from Syria
Tags: basirat ، smuggling Syrian oil ، Daesh Takfiri ، Igor Konashenkov ، Syria
Error Report
0