TEHRAN (Basirat): Islamic Revolution Guards Corps (IRGC) Deputy Commander for Political Affairs Brigadier General Yadollah Javani warned that the US offer of talks with Iran has no goal but opening a window for infiltration and influence over the country. 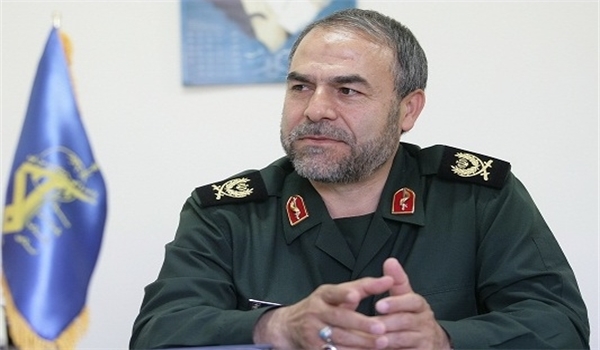 "The Americans for 40 years attempted to defeat Iran. Today, Iran has developed major power components, including military and missile and regional clout which make enemy fearful of its defeat and failure," General Javani said in Karaj city near Tehran on Monday, addressing a ceremony to mark the anniversary of the US embassy takeover in 1979 and commemorate the National Day of Campaign against Global Arrogance and the National Student Day in massive rallies.
"The reactionary regimes, the US and the Europeans should know that today, the Iranian nation's solution to live through these conditions is Islamic resistance and the spirit to fight against the arrogant powers and not sitting to the negotiating table, since the US wants to infiltrate into Iran through negotiations," he added.
General Javani underlined that the realities and facts on the ground today show that liberalism and the capitalist system, led by the US, are on the verge of collapse.
In relevant remarks on Sunday, Supreme Leader of the Islamic Revolution Ayatollah Seyed Ali Khamenei had also underlined that one of the reasons he had voiced objection to bilateral talks with Washington was blocking the United States' infiltration and influence over Iran.
"This rational way closes the Americans' way to infiltrate into Iran again, proves Iran's real awe and might to the world and ruins the other side's hollow awe before the world," Ayatollah Khamenei said.
He noted that the Americans have for years been asking for negotiations with the Iranian officials, saying, "Talks with the Americans will yield no results because certainly, they will not compromise."
Ayatollah Khamenei said American officials believe that if their Iranian counterparts sit to the negotiation, it would mean that they have been brought to their knees, and added negotiations with the Americans do not decrease pressures and sanctions but they will open way for Washington to officially raise its demands.
He stressed Iran's military power and its possession of 2,000km-range missiles with the high precision-striking power of one meter, warning that the US wants to disarm the country of such missiles.
Ayatollah Khamenei reminded that the talks between the US and North Korean leaders have failed to reduce sanctions against Pyongyang.
He also pointed to French President Emmanuel Macron's remarks that the Iranian officials' meeting with US President Donald Trump can resolve all problems in Iran, and said, "This person is either very simple-minded or a collaborator with the Americans."
He also referred to his recent remarks that if the US removes all sanctions against Iran, it can participate in talks with the country within the framework of the Group 5+1, and said, "I knew that they would not accept it and it turned out to be so."
"The US has not changed since November 1964 when its puppet regime exiled our beloved Imam Khomeini. The same aggressive, vicious behavior and the same international dictatorship has continued. Today it has become weaker than in 1964, but it has become more brutal and impudent," Ayatollah Khamenei said.
"The Americans distort history and pretend that the Iran-US disputes stem from the takeover of the US embassy. No. It goes back to the 1953 coup d'état, when the US overthrew a national government – which, of course, had made the mistake of trusting the United States - and established its corrupt and puppet government in Iran," he added.
"After the victory of the Revolution, during the last 41 years, the US has carried out all the hostile actions it knew against the Iranian people, including coups, ethnic provocations, arousing separatism, sanctions, sieges, etc. Of course, we were not inactive and did everything we could to confront the US; and in many cases, we managed to corner them," Ayatollah Khamenei said.
"Our most important confrontation with the United States was to block the way for American political re-infiltration into our country's foundation. Avoiding negotiations is also one of the ways to block American infiltration. It means that there is a nation in the world that does not recognize the usurpation, tyrannical power, and international dictatorship of the US," he underlined.
Source:FNA
Gentlemen at the negotiating table, terrorists of Baghdad Airport
IRGC Deputy Commander: US Should Leave Region
Trump, Not Iran, Has Reached Deadlock
US passes phone number to Swiss in case Iran wants to call: CNN
US Never Dares to Take Military Act against Iran: IRGC Official
Tags: basirat ، IRGC ، General Javani ، Global Arrogance ، reactionary regimes
Error Report
0