US sanctions on Iran killing children with EB: NGO

Tehran  (Basirat):Iranian children suffering from a rare skin condition known as EB are losing their lives as US economic sanctions hamper the flow of vital medical products, an NGO says. 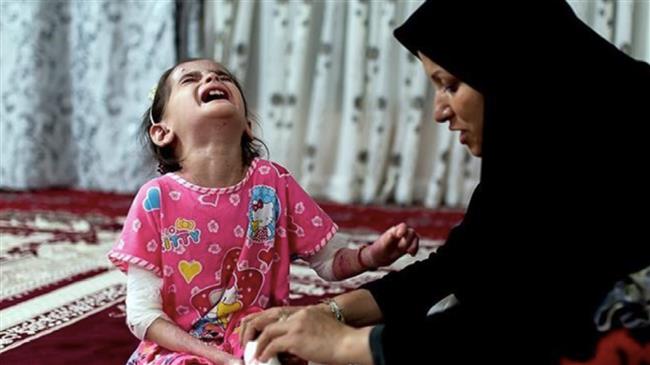 Hamid Reza Hashemi-Golayegani, the head of the NGO that helps such patients, said Sunday that at least 15 Iranian children with epidermolysis bullosa (EB) have died since the US launched its new sanctions on Iran in August.
That is because Swedish medical companies which provided protective bandages for such patients have halted supplies due to the restrictions, he said.
Often known as butterfly children because their skin is as fragile as the wings of a butterfly, EB patients need special care. Even mild frictions or bumps cause severe blistering of the skin which is very painful.
They often have difficulty with their daily activities, such as walking, eating and even breathing, but without proper protective bandages, their agony would be heartbreaking.
The trade of humanitarian goods, such as food, medicine and medical devices, is on paper allowed by the US, still European companies refuse to do business with Iran, fearing secondary American sanctions.
Since the reimposition of sanctions, Swedish medical products firm Molnlycke Health Care has stopped delivering Mepilex dressings which are trusted around the world to treat a wide range of chronic and acute wounds, including in EB patients, Iranian media reports say.
A group of patients in Iran feel the excruciating pain of inhuman US sanctions literally with their skin.
“EB patients are in desperate need of this dressing and unfortunately there is no alternative treatment for them,” Hashemi said, calling on related international bodies to convince the US into exempting food and medicine from its illegal sanctions on Iran.
Last year, President Donald Trump unilaterally pulled the US out of the 2015 nuclear deal with Iran, officially named the Joint Comprehensive Plan of Action (JCPOA), and unleashed the “toughest ever” sanctions against Tehran.
Washington claims the sanctions target the government, but ordinary Iranians are the ones who suffer the most.
Last November, the Islamic Republic of Iran Medical Council (IRIMC) said illegal economic sanctions have negative impacts on the country’s health sector.
In a tweet in early March 2019, Iran's Foreign Minister Mohammad Javad Zarif announced that 66 Iranian scientific medical societies had written to the UN chief in condemnation of the “inhumane and medieval” American sanctions targeting Iran’s health sector.
Iran's Foreign Minister Mohammad Javad Zarif publishes a letter written by 66 scientific societies for medical sciences to the UN chief in condemnation of US sanctions against the Islamic Republic.
Scholars, scientists and academics of 66 Iranian scientific societies highlighted that the unilateral US bans have “deliberately targeted” patients, healthcare sectors, academic research centers, healthcare providers, medical equipment suppliers, active pharmaceutical ingredients providers, pharmaceutical equipment suppliers and heath regulators.
The International Court of Justice (ICJ) - the principal judicial organ of the United Nations – ordered the US in October 2018 to halt the unilateral sanctions it had reimposed on "humanitarian" supplies to Iran.
Source:PressTv