Daesh-Style Lynching at Heart of Baghdad

Tehran (Basirat) : Iraq’s top Shia cleric Friday denounced the Daesh-style slaying of a teenager whose body was strung up by his feet from a traffic pole in a Baghdad square. 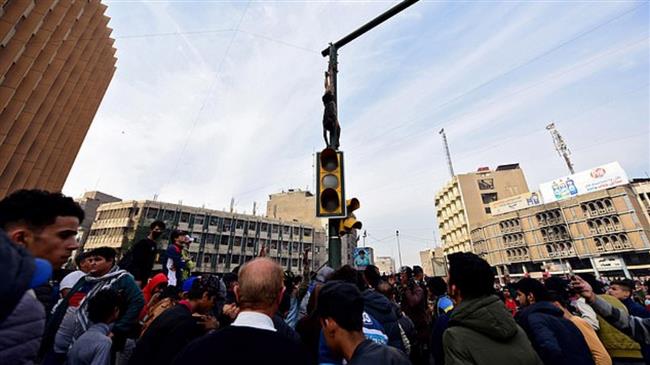 Grand Ayatollah Ali al-Sistani called the teen’s killing a "horrific crime” that must not be repeated and called on Iraqi authorities to hold the perpetrators accountable.
He said the recurrence of such crimes will impact the stability of Iraq and peaceful demonstrations in the country. The top cleric expressed regret that a huge crowd stood by and watched and even participated in the heinous crime. He called for the punishment of those behind the violence.
"The gruesome murder and hanging of the victim is a crime whose perpetrators must be held accountable,” Ayatollah Sistani said.
On Thursday, a group of "protesters” in Baghdad stabbed into death and cut the throat of Haitham Ali Ismael before hanging him by his ankles.
The boy had been berating the protesters for three days for obstructing the street beside his house and making noise, but he had been largely ignored.
Witnesses said he climbed up onto the roof of his house on Thursday and began shooting in the air with a pistol in order to shoo the protesters away from his family’s home.
That prompted a mob of protesters to barge into his small house at the edge of the Al Wathba Square where Haitham lived with his mother and stabbed him for 17 times.
Then they took him outside, pulled off his clothes, dragged him bleeding through the streets, hung him by his ankles from a traffic light pole and cut his throat.
People on social media have described the rioters as new Daesh.
Protesters were quick to distance themselves from Thursday’s violence in a collective statement in which they condemned the incident and said those who carried it out were not part of their movement.
Western media and the Saudi-owned newspaper Asharq al-Awsat recently reported that some of the protesters have created what they call a "mini-state” in Baghdad’s Tahrir Square.
Sa’ad al-Muttalibi, an Iraqi parliamentarian and member of the State of Law Coalition in Baghdad, recently told Press TV that Saudi Arabia is playing a certain part, financing part of the demonstrations that have brought Iraq into chaos.
"Israel has been planning this for years alongside the Americans and Saudis, just they are not intelligent enough to create something like that but have the enough money to finance that.”
Alarm bells have started to ring for Iraq where a series of suspicious events, including unknown assailants machine-gunning protesters in Baghdad and a drone targeting an anti-U.S. cleric, have raised fears of the country slipping deeper into violence and chaos.
Last Friday, armed men emerged from cars overnight, opening fire on protesters and killing at least 25 people who were in a building where many supporters of Muqtada al-Sadr gathered to stage demonstrations.
The U.S. was quick to implicate Hashd al-Sha’abi, a combination of some 40 groups of mostly Shia fighters as well as Sunnis and Christians, which are currently integrated into the regular armed forces.
The Iraqi Foreign Ministry on Monday summoned four Western ambassadors over "interference in internal affairs.”
Hashd al-Sha’abi sources have said the U.S. was allowing Daesh to roam freely under its watch in Iraq’s western Anbar province.
In his weekly sermon, delivered by a representative, Ayatollah Sistani condemned recent killings, kidnappings and assaults on protesters, which have borne all the hallmarks of Daesh terrorists.
The top cleric said the attacks as well as targeted assassinations and kidnappings in recent days reinforced previous calls by the religious establishment that "all weapons must be in the hands of the state.”
Source:Kayhan
Iraqi forces, people entitled to retaliate US attack on PMU bases: IRGC
Iraq's Top Cleric Calls for Quick Formation of Government
Finding a replacement for Adel Abdul Mahdi
i-Witness: What is happening in Iraq and Lebanon?
Top Cleric Warns against Plots to Sow 'Infighting' in Iraq
Iran’s Envoy Discloses Plot behind Najaf Consulate Attack
Tags: basirat ، Ayatollah Ali al-Sistani ، Daesh-Style Lynching ، Haitham Ali Ismael ، hashd al-shabi
Error Report
0