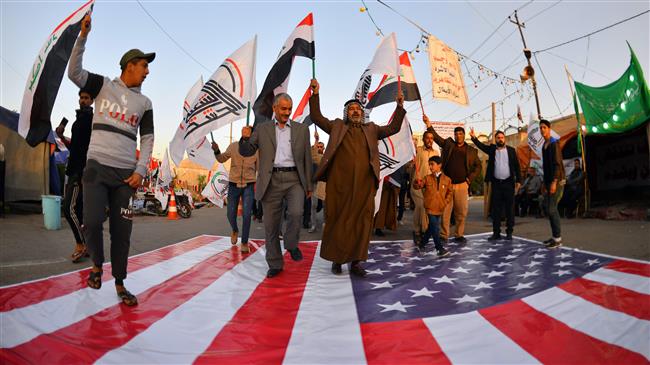 The PMU on Sunday confirmed that US forces in Iraq have carried out an airstrike on a number of its facilities in the western Anbar Province, which led to the killing of nearly 30 people and injuring of over 50 others.
In a statement on Monday, the IRGC said, "The airstrikes by the American terrorists on Hashd al-Sha’abi bases … constitute a violation of the national sovereignty of this country (Iraq) and once again show that the US is the main factor behind insecurity, chaos, tension and warmongering in this region."
Iran's IRGC emphasized that no "free and independent nation" would tolerate that its youths become targets of foreign forces' aggression and lust for crime, adding, "Naturally, the brave people and heroic Hashd al-Sha'bi forces of Iraq reserve the right to retaliate and give [proportionate] response to the recent 'big crime of Americans according to international laws and conventions."
The US attack came after American officials said on Friday that a “US civilian contractor” had been killed in what they described as a rocket attack targeting an Iraqi military base housing US and Iraqi forces in the Arab country’s north.
American officials say a “US civilian contractor” has been killed in, what they describe as, a rocket attack targeting a military base in northern Iraq.
Several US service members and Iraqi personnel were also wounded in the reported incident, Reuters added, citing a US-led military coalition, which has stationed itself in Iraq under the pretext of fighting the Takfiri terror group of Daesh.
Iranian Foreign Ministry Spokesman Abbas Mousavi said on Monday that the US airstrikes targeting the forces that have helped defeat Daesh in Iraq are a “clear example of terrorism."
Iran says US airstrikes on forces that have helped defeat Daesh in Iraq is a “clear example of terrorism".
"These attacks have once again proved America's false claims in fighting the Takfiri group of Daesh as the United States has targeted the positions of forces that over the years have inflicted heavy blows to Daesh terrorists," Mousavi said.
Source:PressTv