TEHRAN (Basirat) :  People of all walks of life took to the streets on Monday to celebrate the anniversary of the “Dey 9 epic”, which put an end to the unrest that had followed the 2009 presidential election. 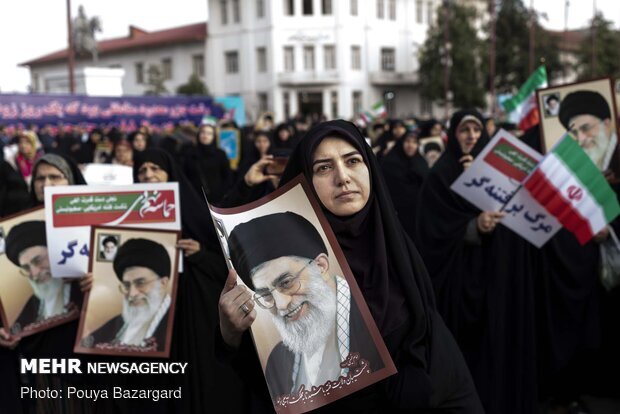 Back on 30 December 2009, known as Dey 9 in the Iranian calendar, millions of people staged pro-establishment rallies across the country including the capital Tehran to put an end to what the Iranian authorities described as “sedition” which had been going on for months following presidential elections earlier that year.
People were especially incensed by the incidents that occurred days earlier in Tehran, where a group of rioters engaged in blaspheming Ashura, the day marking the martyrdom anniversary of Imam Hussein, the third Shia Imam.
During this year’s rallies, people renewed their allegiance to the Islamic Revolution and denounced foreign-orchestrated riots, Mehr reported.
At the end of the rallies in Tehran, a statement was read out on behalf of the participants, which called for national unity and support for the Islamic Republic.
The statement also condemned the United States’ evil actions, pointing to an attack by U.S. forces against the Iraqi soil and positions of al-Hashd al-Shaabi forces in the Arab country as an example of Washington’s brutality.
On Sunday, U.S. forces conducted drone strikes on a number of Kata'ib Hezbollah bases in Iraq’s western Anbar province, killing at least 25 individuals and leaving another 51 injured, according to the PMU.
The targeted Kata'ib Hezbollah forces belonged to brigades 45 and 46 of the PMU, according to PMU official Jawad Kazim al-Rabi'awi.
Source:Tasnim
Iranians to mark 2009 rallies in support of Islamic establishment
Iran Commemorates 2009 Massive Pro-Establishment Rally
Iran Commemorates 2009 Pledge of Allegiance Rally
Tags: basirat ، sedition ، Ashura ، Imam Hussein ، al-Hashd al-Shaabi ، Dey 9 epic
Error Report
0