TEHRAN (Basirat): Millions of Iranians took to the streets in Tehran and other cities to protest against American "crimes" and call for revenge after U.S. strikes martyred a top Iranian commander in Baghdad Friday. 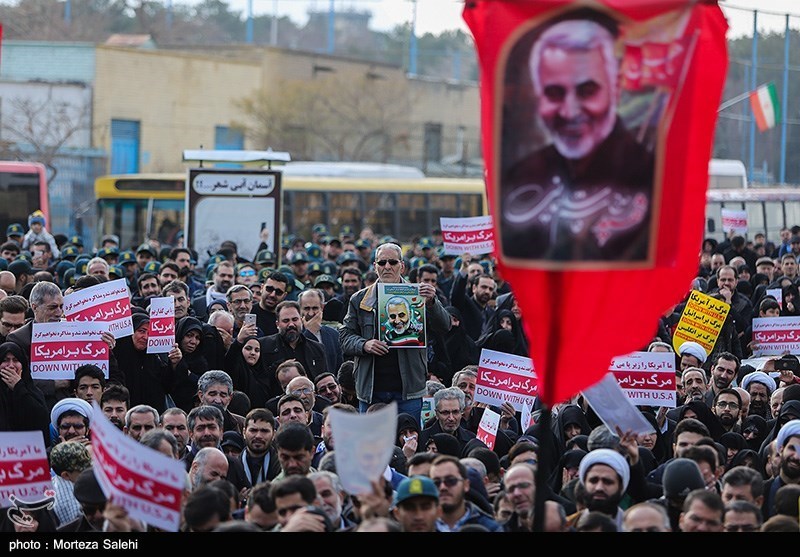 Chanting "Death to America" and holding up posters of Gen. Qassem Soleimani, the demonstrators filled major streets for several blocks in central Tehran and other cities across Iran after Friday prayers.
Women and men, many of them elderly, took part in the procession, some holding up portraits of Leader of the Islamic Revolution Ayatollah Seyyed Ali Khamenei.
"The axis of any evil is America, the motto of religion and the Qur’an is death to America," they said in unison. "O Leader of our revolution, condolences, condolences."
The demonstrators carried signs that warned the United States, the occupying regime of Israel and their regional allies of harsh consequences.
Similar demonstrations were held in the cities of Mashhad, Tabriz, Arak, Bojnourd, Hamadan, Hormozgan, Sanandaj, Semnan, Shiraz and Yazd.
News of the martyrdom of Gen. Soleimani, one of Iran's most popular public figures across Iran, also saw people hold impromptu gatherings in his central hometown of Kerman.
"The outcome of this bloodshed is the end of U.S. military presence in the region and the resistance front’s final victory over Israel,” Kerman Friday prayers leader Hojjatoleslam Hassan Alidadi said.
The protesters expressed solidarity with General Soleimani’s family and supported Ayatollah Khamenei’s pledge to exact a "severe revenge” against America.
Tehran Friday prayers leader Ayatollah Seyyed Ahmad Khatami told worshipers the U.S. attack means "Americans around the world will never experience calm again.”
He said General Soleimani was the mastermind of the battle against the Western-backed Daesh terrorist group and the U.S. administration will pay the price for assassinating him.
"The Americans should beware that they did not achieve victory here and rather took one more step towards annihilation,” Ayatollah Khatami said. "Today, the world and the resistance movements in Syria, Lebanon and other places are mourning Gen. Soleimani and want to avenge his blood.”
"The Americans, Trump in particular, can rest assured that Gen. Soleimani’s blood will erupt and we will take our revenge against them and turn their bright day into black night,” he said.
The senior cleric said the U.S. strike shows it is time to purge American forces from the region.
"The time has arrived for the resistance to tell the Americans in practice to ‘Get out of the region you savages!’” he said.
Outside Iran, hundreds of protesters marched in the northern Indian town of Budgam on Friday to condemn the assassination of Gen. Soleimani.
In Islamabad, Pakistani protesters took to the streets in a demonstration called by a student organization to condemn the terrorist U.S. attack.
Later Friday, Iran's Supreme National Security Council (SNSC) said a harsh vengeance awaits criminals "in the right place at the right time".
"Iran's Supreme National Security Council, during its extraordinary session today, examined various aspects of this incident and made appropriate decisions. It announces that the regime of the United States of America will be responsible for all the consequences of this criminal adventurism," it said in a statement.
"The U.S. should know that the criminal attack against General Soleimani was its biggest strategic mistake in West Asia, and America will not easily get away with the consequences of this miscalculation," it added.
Iran's top security body also said such "blind and coward measures" would strengthen the Islamic Republic's determination to keep up with its resistance policies.
"Undoubtedly, this crime was the revenge of Daesh and Takfiri terrorists against big commanders of the fight against terrorism which was carried out by the U.S. against honorable symbols of the elimination of terrorism in Iraq and Syria," it said.
Source:KAYHAN
Iran’s Response Will Be against Military Sites, Adviser Says
Iranian media react to Quds Force chief assassination
Iraqis hold massive funeral procession for Lieutenant General Soleimani
Iranians Take to Streets to Mourn for Gen. Soleimani Assassinated by US
IRGC Quds Force Gets New Commander after Soleimani's Martyrdom
Tags: basirat ، Gen. Soleimani ، Assassination ، Death to America ، severe revenge
Error Report
0