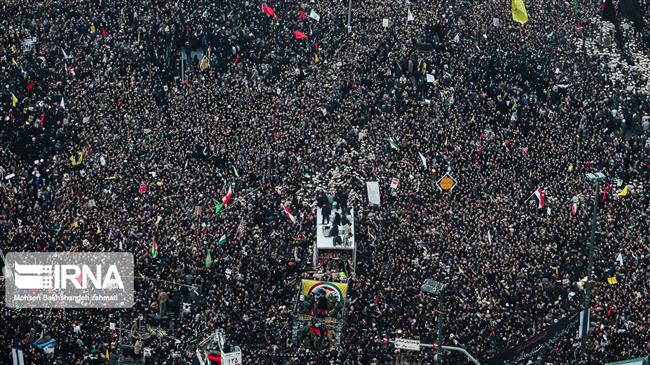 Millions of mourners have thronged the streets in Iran’s southeastern city of Kerman, the hometown of Lieutenant General Qassem Soleimani, to attend a final funeral and burial rituals for the top defense strategist, who was assassinated by the US military during a visit to neighboring Iraq.
The remains of General Soleimani and one of his companions Major General Hossein Pourjafari, who was also martyred in the same US assassination operation, arrived at the Kerman airport, following massive funeral processions in the Iraqi cities of Baghdad, Karbala and Najaf as well as the cities of Ahvaz, Mashhad, Tehran and Qom in Iran.
An estimated seven million mourners packed the 11-kilometer thoroughfare connecting the two Azadi (Freedom) and Imam Hossein squares as well as the intersecting side streets in the capital Tehran during Monday's funeral, according to the Coordination Council for Islamic Propagation.

Millions of Iranians have packed the streets of Tehran to pay homage to General Qassem Soleimani who was assassinated on US President Donald Trump
From the early hours of Tuesday, large crowds of black-clad mourners began filling the streets of Kerman to pay their respect to the Middle East’s most prominent anti-terror commander.
Chants of ‘Death to America’ have been ringing out across the city, with mourners carrying the portraits of the national hero.
The late commander of the Quds Force of Iran’s Islamic Revolution Guards Corps (IRGC) will be laid to rest in his hometown following the funeral procession.
US President Donald Trump ordered a US drone strike early Friday on General Soleimani’s motorcade upon his arrival in the Iraqi capital at the invitation of the Baghdad government.
The attack also killed Abu Mahdi al-Muhandis, the second-in-command of Iraq’s Popular Mobilization Units (PMU), as well as eight other Iranian and Iraqi people.
General Soleimani is viewed by the world's freedom-seeking people as the key figure in the Middle East battles that led to the collapse of Daesh, the world’s most notorious terror group.
A separate mass funeral is also underway for Muhandis in the southwestern city of Abadan, from where his body will be taken to Khorramshahr and Shalamcheh in Iran’s Khuzestan Province for similar mourning ceremonies.
Later in the day, the remains of the senior Iraqi commander will be taken back to his home country.
‘Architect of America’s defeat’
Addressing the mourners, Major General Hossein Salami, the IRGC chief commander, condemned the US military’s “cowardly” assassination.
“I start with the last word. We will take revenge. Our revenge will be harsh, decisive and finishing. Stay assured and calm,” the IRGC chief said. “The general’s martyrdom is a starting point for an early end to America’s presence in the Muslim world. I declare that you will see this happen very soon.”

Salami also described Soleimani as the “architect of America’s defeat” and a figure praised “beyond the Muslim world,” saying he is the role model of resistance and support for the oppressed.
Source:PressTv
Last night’s action was merely a slap, but the U.S. must leave the region
General Soleimani's Body Laid to Rest in His Hometown
Iran Hits US Base in Iraq in Retaliation Attacks after US Killing of Gen. Soleimani
Iran Designates Pentagon as Terrorist Organization
IRGC Chief Vows Harsh Revenge for General Soleimani’s Assassination
Millions of Iranians Attend General Soleimani’s Funeral in Tehran + photo
Soleimani martyrdom won’t change path of Resistance: Ismail Haniyeh
Trump is a symbol of ignorance, says Soleimani's daughter
Tags: basirat ، Gen. Soleimani ، Kerman ، funeral ، burial rituals ، US assassination operation
Error Report
0