Iran Can Disable US Global Hawk from Tehran: IRGC Commander 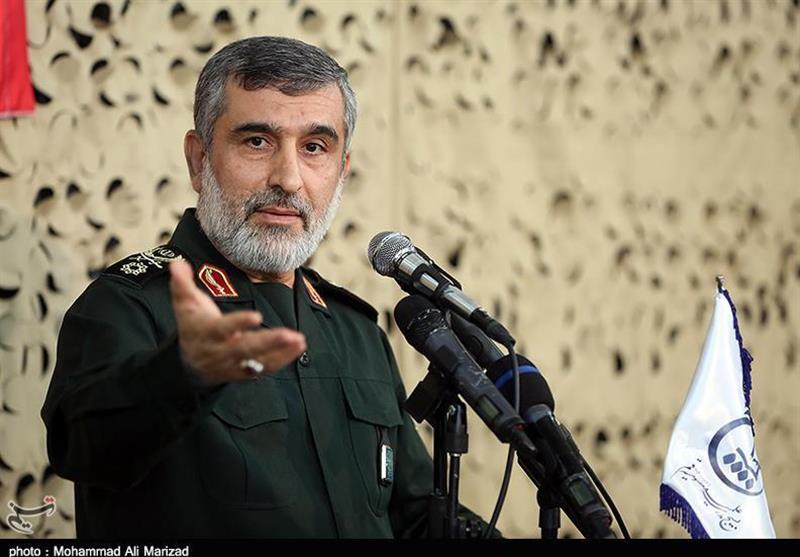 In comments at a televised interview, General Hajizadeh provided more details of an American RQ-4A Global Hawk drone which had been shot down by the IRGC Aerospace Force in Iran’s airspace in June 2019 and whose full wreckage was put on display on Thursday.
Describing the downed American aircraft as the largest spy drone in the world, the general said it can fly at very high altitudes and in any aerial route.
The American drone that was shot down by Iran is so powerful that it can fly directly from the US to the Persian Gulf, Hajizadeh noted, saying the large unmanned plane is equipped with all espionage equipment.
The commander then advised the Americans to consider a “red line” for using that costly drone against Iran, saying the Islamic Republic has gained access to all of the aircraft’s “codes and frequencies.”
“It means that we are not only able to track that drone from a distance of 100 kilometers, but we are capable of disabling this drone from here in Tehran up to a distance of thousands of kilometers,” he explained.
On Thursday morning, the IRGC showcased the full wreckage of the modern American spy drone which was shot down by the forces in southern Iran in June 2019.
A small part of the drone’s wreckage had been put on display a day after the shooting down.
The IRGC said on June 20, 2019, that a US spy drone that violated the Iranian territorial airspace in the early hours of the day was shot down by the IRGC Aerospace Force’s air defense unit near the Kooh-e-Mobarak region in the southern province of Hormozgan.
The intruding drone was reportedly shot by Iran’s homegrown air defense missile system “Khordad-3rd”.
Source:Tasnim
IRGC unveils new surface-to-surface missile, modern propellant for missiles, satellite carriers
New scandal around empire of lies
Deputy parliament speaker says drone downing was a ‘punch in the U.S. mouth’
Iran releases first photos of downed US drone's wreckage
IRGC Shoots Down US Drone in Iran’s Airspace
Tags: basirat ، IRGC ، General Hajizadeh ، Global Hawk ، RQ-4A
Error Report
0