TEHRAN (Basirat) : The Aerospace Force of the Islamic Revolution Guards Corps (IRGC), in a ceremony on Sunday, unveiled its new products, including the surface-to-surface Ra’ad 500 missile and a new generation of propellants for missiles and satellite carriers. 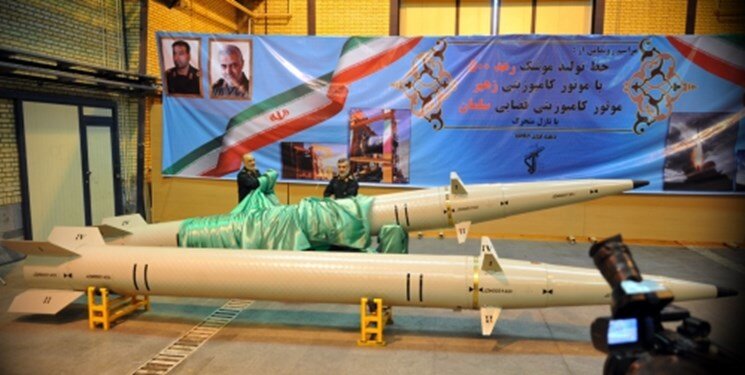 The ceremony was attended by IRGC Chief Major General Hossein Salami as well as IRGC Aerospace Force Commander Brigadier General Amir Ali Hajizadeh, according to Sepah News.
The news website said the Aerospace Force managed to unveil its new surface to surface missile with composite body titled Zahir, half the weight of Fateh 110, and 200 kilometers further in terms of range in comparison to Fateh.
The final range of the Ra’ad 500 missile is 500 km. The IRGC also unveiled the Salman space rocket engine with thrust vectoring nozzle which is considered as the new generation for the space rockets and trust rocket engines.
The newly-unveiled thrust vectoring nozzle has been manufactured by connecting composite body with a vectoring nozzle which paves the way for utilizing the engine with solid fuel in space.
Addressing the ceremony, General Salami pointed to the Saturday remarks of the Leader of the Islamic Revolution Ayatollah Khamenei, saying, “Being strong is the heat of new defense policies of the Islamic Republic.”
“Our real war is producing and manufacturing for being strong,” the commander said, adding, “The newly-unveiled complex achievements are our key to enter far space.”
“Enjoying the technology of vectoring nozzles, the possibility of controlling solid fuel out of atmospheres for spacecraft, trust rockets, and anti-shield missiles has been materialized,” the commander of IRGC Aerospace Force said at the ceremony.
“We, in the Guards Aerospace Force, have an agreement with the country’s scientists and experts based on which the achievements in defense sector should be economically cost-effective; accordingly, today we witnessed our capabilities in military and technical field as well as cost effective productions,” Hajizadeh went on to say.
In his remarks on Saturday, Ayatollah Khamenei said to prevent a war against itself, Iran must increase its military power, noting that being militarily vulnerable would prompt the enemy to take action against the country.
“In order to prevent war and in order to put an end to threats we must become powerful,” Ayatollah Khamenei told a number of Air Force officers on the occasion of Air Force Day.
The Leader went on to say, “We are not seeking to threaten any country or nation, rather we are after protecting the country’s security and preventing threats.”
Ayatollah Khamenei also said reliance on domestic capacities and turning threats into opportunities are the chief reasons for the successes of the Air Force.
“In addition to repairing and maintenance of aircraft, the Air Force has successfully planned and manufactured fighter jets in spite of the U.S. sanctions,” the Leader stated.
Source:TehranTimes
Iran Can Disable US Global Hawk from Tehran: IRGC Commander
US Missile Defense System A Joke: American Analyst
Fresh information released about U.S. Army casualties in Iran missile attack
Tags: basirat ، IRGC ، General Hossein Salami ، General Amir Ali Hajizadeh ، missile
Error Report
0