Tehran (Basirat) :Iranian President Hassan Rouhani has likened the US sanctions against the Islamic Republic to the novel coronavirus, the fear of which he said is greater than its reality. 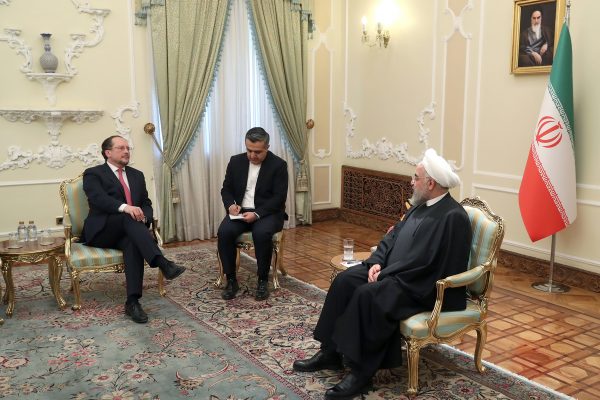 In a Sunday meeting with the foreign minister of Austria in Tehran, President Rouhani said the US sanctions are similar to the coronavirus, as the panic about them is bigger than the reality.
“The European Union is expected to stand against the US’ illegal measures,” the president added.
He also highlighted the suitable grounds for economic cooperation between Tehran and Vienna, saying, “We hope Austria would not care about the illegal and incorrect pressures from Americans in the promotion of cooperation (with Iran).”
The 2015 nuclear deal does not belong only to Iran, to Europe or to the Group 5+1, but is an influential factor in the regional and international peace and security, President Rouhani noted, stressing, “We still believe that we can save the JCPOA.”
The Joint Comprehensive Plan of Action could work as an appropriate base to build mutual trust between Iran and the West, including the European Union and the US, the president stated, emphasizing that Iran has lived up to its part of the agreement.
Denouncing the US sanctions on the export of foodstuff and pharmaceutical products to Iran, President Rouhani said such sanctions amount to an “act of terrorism”.
“We expect the European Union to fulfill its humanitarian duty in this regard,” the president told the Austrian minister.
President Rouhani then reiterated that the regional security must be ensured by the regional countries themselves, adding, “Today, the security of the region’s sea routes has decreased compared to the past, and many countries in our region, such as Yemen, Iraq, Syria, and Afghanistan are not experiencing suitable security conditions.”
He said Iran has proposed the Hormuz Peace Endeavor for the establishment of peace and security in the region, noting, “All of the problems of our region result from the US’ wrong and illegal interference in the affairs of the region.”
“We believe that the security of this region (Middle East) is important for the security of Europe and for the safety of the energy routes in the entire world and Europe,” President Rouhani underlined.
He finally expressed hope for the enhancement of cooperation between Iran and Austria in various fields, and also hoped that the Austrian foreign minister’s trip to Tehran would lead to positive developments in the ties between Iran and the European Union.
In turn, Alexander Schallenberg hailed the friendly and age-old relations between Austria and Iran, and highlighted the efforts to boost the bilateral ties in all fields, particularly the economic and trade interaction.
The Austrian diplomat also described the JCPOA as a milestone in trust-building efforts in the region and the world, highlighted the plan to save the JCPOA as a main policy of Austria and the EU, and vowed to make whatever effort necessary to salvage the nuclear deal.
“We believe that the JCPOA has a significant role in maintaining calm and stability in the region, and it is necessary to save it,” Schallenberg added, lauding Iran for its major role in ensuring stability and security in the region.
He also praised the Iranian peace initiative, known as the Hormuz Peace Endeavor, saying the plan could become a “road map to peace and stability in the region”.
“Austria welcomes this initiative, which has been proposed to build trust, and is willing to play a positive role in this process,” the European diplomat concluded.
Source:IFP
Ayatollah Jannati mocks US new sanctions on him
U.S. sanctions are crimes, but they can be turned into opportunities
Iran takes final JCPOA step, removing last limit on nuclear program
Tags: basirat ، Coronavirus ، Rouhani ، US Sanctions
Error Report
0