Imam Khamenei's advice to the people on Coronavirus 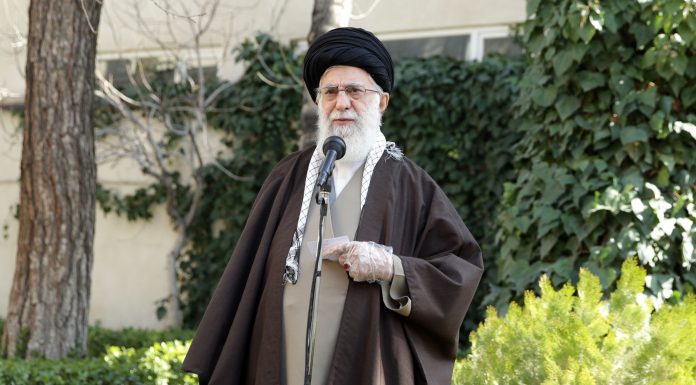 This includes important advice from the Leader of the Islamic Revolution to the people about the current epidemic.
After planting two saplings, Imam Khamenei made a speech in which he called tree planting an activity with blessings. He also referred to the disease which has entered the country and said, “I previously expressed my heartfelt gratitude to the doctors, nurses and medical staff. I feel it is my duty to again thank these dear ones who are fighting for the cause of Allah with their very valuable work.”
The Leader of the Islamic Revolution believes the examples of dedication and sacrifice of the medical staff in treating patients show their responsibility and commitment, and he added, “I would also like to thank the families of doctors, nurses and all the medical staff who support the round the clock endeavors of their loved ones with their patience and tolerance.”
After praying for the recovery of the sick, asking for God’s divine mercy and forgiveness for those who have passed away from this illness, and praying for their families’ patience, he made several recommendations to people.
After emphasizing the need to observe the recommendations and instructions of the officials for prevention, Imam Khamenei added, “Their instructions should not be violated, because God has obliged us to take responsibility for our own health and that of others. So, whatever contributes to the society’s health and prevents the spread of this disease is good, and whatever contributes to spreading the disease is bad.”
The Leader of the Islamic Revolution also made another recommendation in calling upon everyone to rely upon and trust in the Lord, and he stated, “Of course, this tragedy is not too big; we have been through bigger tragedies. However, I highly believe in the effectiveness of the prayers, which come from the pure and immaculate hearts of the youth and pious people, in being able to repel major tragedies. Because, supplicating God and asking for the intercession of Prophet Muhammad (pbuh) and the Holy Imams (pbut) can solve many problems.”
He also added, “The seventh prayer in ‘Sahifah Sajjadiyah’  is a very good and meaningful prayer, which one can use to speak to the Lord with these beautiful words and while paying attention to its meaning.”
Imam Khamenei also urged all sectors in the country to cooperate and provide the necessary facilities to the Ministry of Health, which is at the forefront of the fight against the disease, and stated, "The armed forces and entities connected with the Office of the Leader are also obliged to do the same.”
The Leader of the Islamic Revolution referred to the fact that many countries in the world have been afflicted with this disease, and he went on to say, “Our officials have been informing the public since the first day with honesty and transparency, but some other countries where the disease is more widespread are hiding the news. Of course, we also ask Allah to bestow health on those people who are sick too.”
His Eminence considered the incident to be transient rather than severe and said, “Of course, I do not want to say this problem is unimportant, but we should not make it too big either. This incident will afflict the country for a temporary period of time, and then it will be gone. Meanwhile, the experiences gained from it and the actions of people and government sectors, which are like a public exercise, can remain as an achievement.”
Imam Khamenei made reference to the kind and charitable actions of some compatriots, such as financial donations and the distribution of health care products, and added, “These are very good actions, and if we protect these achievements, tragedies will turn into blessings and threats will turn into opportunities. We hope that the dear Iranian nation will soon have complete health and prosperity."
Source:english.khamenei.ir