TEHRAN(Basirat): Several political analysts have unveiled a new decision by the US for escalation of tensions against the resistance groups in Iraq could lead to the rise to power of the US-backed candidate for prime minister's post, Adnan al-Zorfi, or an eventual military coup in that country. 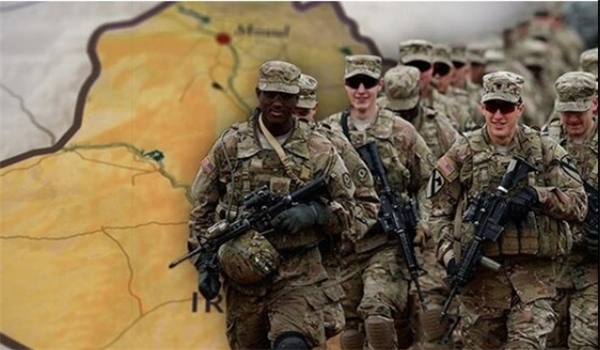 The recent developments in Western and Southwestern Asia, specially Iraq, are harbinger of serious changes in the region.

The US and its European allies' movements in Iraq, inculding evacuation of the so-called diplomatic centers and shuting down important military bases such as al-Qayyareh, K1 and Kirkuk as well as a dead-end in electon of Iraq's prime minister, are all signs of silence before a typhoon.

Some political analysts of the Middle East region have assessed these movements as a prelude to a coup in Iraq and believe that launching heavy attacks by the US Army on Iraq's resistance groups and that country's Popular Mobilization Units (Hashd al-Sha'abi) are being conducted in line with such mischievous goals.

Meantime, a new wave of fake news falsely claiming assassination of senior commanders of Hashd al-Sha'abi in the US Army's drone attacks is underway as part of a large-scale psychological war.

The New York Times reported on Saturday of a secret Pentagon directive orders planning to try to destroy Kataeb al-Hezbollah forces of Iraq, but America’s top general in Iraq cautions of the risks.

The Pentagon has ordered military commanders to plan for an escalation of American combat in Iraq, issuing a directive last week to prepare a campaign to destroy the Iraqi Popular Mobilization Units forces who have threatened more attacks against American troops.

But the United States’ top commander in Iraq has warned that such a campaign could be bloody and counterproductive and risks war with Iran. In a blunt memo last week, the commander, Lt. Gen. Robert P. White, wrote that a new military campaign would also require thousands more American troops be sent to Iraq and divert resources from what has been the primary American military mission there: training Iraqi troops to combat the Islamic State of Iraq and the Levant.

The Pentagon directive and General White’s response — both classified internal military communications — were described by several American officials with direct knowledge of their contents. The exchange comes amid a simmering fight inside the Trump administration over policy toward Iran and the course of America’s war in Iraq, which began just over 17 years ago.

Earlier this week, Kataeb Hezbollah held a military drill, dubbed Hunting the Crow, in the town of Jurf al-Nasr near Baghdad, to prepare itself for battling occupying US troops after suspicious American activities.

Kataeb Spokesman Jaafar al-Husseini said sophisticated weapons with live ammunition were used in the exercises, which simulated a number of engagement patterns, including confronting airstrikes and land exposure, and fighting in a forest environment.

On Wednesday, the group warned its fighters to prepare for possible US attacks and threatened retaliation.

“We will respond with full force to all their military, security, and economic facilities,” it said in a statement.

Some top officials, including Secretary of State Mike Pompeo and Robert C. O’Brien, the national security adviser, have been pushing for aggressive new action and see an opportunity to try to destroy militia groups in Iraq.

Military leaders, including Defense Secretary Mark T. Esper and Gen. Mark A. Milley, the chairman of the Joint Chiefs of Staff, have been wary of a sharp military escalation, warning it could further destabilize the Middle East at a time when President Trump has said he hopes to reduce the number of American troops in the region.

Still, American officials said Mr. Esper authorized planning for a new campaign inside Iraq — even as the military reduces its counterterrorism presence there — to provide options for Mr. Trump.

During an Oval Office meeting on March 19, Mr. Trump did not make a decision about whether he might authorize the new campaign in Iraq, but allowed the planning to continue, according to American officials.

The US has also conducted a string of deadly airstrikes on Iraqi military bases, which are denounced by Baghdad as a violation of its sovereign and targeted aggression against its official armed forces.

In the current difficult situation, when Iraq has mobilized all its resources to contain the spread of the coronavirus and the popular forces are busy helping the government in the battle, the PMU has been monitoring “suspicious moves by US forces and their mercenaries”, who intend to exploit the pandemic and advance certain plots in the country, the statement by Kataeb Hezollah said.

The US plans to conduct heliborne operations backed up by ground troops and fighter jets against positions belonging to security agencies and positions of Iraq’s resistance groups, the statement added.

Kataeb Hezbollah also warned against the dangerous consequences of such a raid, saying it would worsen the health crisis in Iraq and bring about a humanitarian and social disaster there.

Stating that the US plot endangers internal peace in Iraq, the resistance group vowed a firm response to any such operation.

Iraq’s resistance forces will have many options in face of such a move by the occupying enemy, the statement said, adding that the resistance forces would have to respond “with full force” by targeting the US “military, security, and economic facilities without exception and turn into their graveyard the positions they have planned to attack”.

It also warned any Iraqi party against collaborating with the US in carrying out this conspiracy.

“The Iraqi side will be treated like an enemy, and its betrayal and crime will never be forgiven… and will be heavily punished according to law,” it said.

Anti-American sentiment has been running high in Iraq following the assassination on January 3 of Iran’s top anti-terror commander Lieutenant General Qassem Soleimani along with Abu Mahdi al-Muhandis, the deputy head of Iraq’s PMU, along with their companions.

The terrorist act promoted the Iraqi parliament to vote for the expulsion of US forces from the country, but the government has not acted on the decision yet as it is grappling with a political deadlock.

After the assassination, Iran and Iraq’s PMU vowed revenge, with Tehran targeting two US bases with missiles days later.

The PMU also said the reaction would be “no less in size” than Tehran’s missile strikes.

It has, however, denied repeated US claims that it had been behind rocket attacks targeting US and other foreign missions and bases in Iraq.

Earlier this month, the Iraqi military renewed the call for an immediate withdrawal of all foreign troops from the country in accordance with the parliamentary resolution passed earlier this year following a string of US strikes against multiple PMU positions.

The US blamed the Iraqi force for attacks on a base hosting American troops in the Arab country. The PMU, however, denied any involvement.

In another development, three rockets targeted an area near the US embassy inside the highly secured Green Zone of Baghdad.

The Green Zone is home to several Western embassies and government offices including the parliament, the prime minister's office, and the presidency.

In recent months, however, the fortified zone has been repeatedly targeted by Katyusha rockets.