Most Britons believe selling arms to Saudis is ‘unacceptable’ 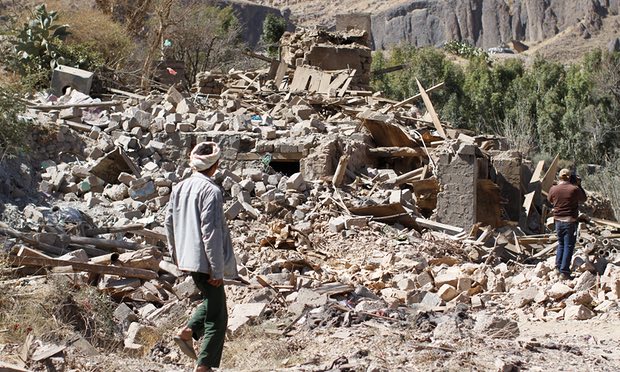 The finding comes ahead of this week’s high court case, which has the potential to derail arms sales to the kingdom – and could have major consequences for defence exports to other countries too.
The case, on Tuesday, comes at a time when Theresa May’s government is keen to promote UK arms exports. In a post-Brexit world, ministers believe the arms industry could be a major beneficiary when the UK establishes new trade deals. Last month, May agreed a £100m deal to help equip the Turkish military with fighter jets.
But an Opinium poll conducted for the Campaign Against the Arms Tradesuggests the government’s enthusiasm for selling weapons to regimes with questionable human rights records is firmly out of step with public opinion.
The poll shows that 62% of people surveyed think selling arms to Saudi is unacceptable. More broadly, more than seven in 10 people (71%) think that the UK should not promote the sale of weapons to foreign governments accused of violating international humanitarian law. Six in 10 (60%) agree that the government should not promote sales to countries that are not democracies. Only a quarter (26%) agree that the UK should promote the sale of British military equipment to foreign governments, compared with a third (34%) who disagree.

The high court case will place all UK arms exports under close scrutiny.
CAAT is calling for the Department for International Trade to suspend all existing arms export licences and to stop issuing further licences to Saudi Arabia for military equipment intended for use in Yemen while it reviews the compatibility of the exports with UK and EU legislation.
"UK fighter jets and bombs have been central to the devastation [in Yemen],” said Andrew Smith of CAAT. "Whatever the verdict, it won’t be the end of the issue. May and her colleagues must listen to the public and finally end their toxic military relationship with Saudi Arabia.”

The UK has sold over £3.3bn-worth of arms – including fighter jets, bombs and missiles – to Saudi forces since the bombing of Yemen began in March 2015. But a range of international organisations, including a UN panel of experts, the European parliament and many humanitarian NGOs, have condemned the ongoing Saudi air strikes against Yemen as unlawful and are backing the rare legal challenge to the government.
They say that UK law, the global arms trade treaty – to which the UK is a state party – and international law require the UK to ensure that its arms transfers do not aid the commission of war crimes by Saudi Arabia.
Human rights groups including Amnesty International allege the air strikes are in violation of these laws for a number of reasons, including the disproportionate harm done to civilians and civilian infrastructure and the destruction of cultural property.
"The UK government’s repeated refusal to halt arms transfers beggars belief, given the extensive and credible reporting showing the Saudi Arabia-led coalition’s ongoing serious violations of international human rights and humanitarian law, including possible war crimes,” said James Lynch, Amnesty’s head of arms control and human rights.