JCPOA to remain intact; Trump’s remarks nothing but pile of insults

TEHRAN(Basirat): Iran's President Hassan Rouhani in response to US Trump's anti-Iran speech on Friday, spoke to the Iranian people in a televised speech on October 13. 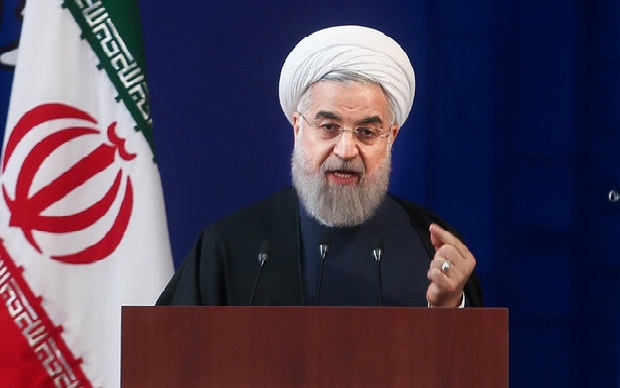 Iranian President Hassan Rouhani said the Iranian nation will never yield to any power, underlining no article would be added to or removed from JCPOA.

"US President Donald Trump’s speech against the Islamic Republic was nothing but insults and delirious talk," Rouhani said in a televised speech on Friday moments after Trumped delivered a speech outlining US strategy on the Islamic Republic. "I invite the president of the United States to read both history and geography better, as well as world literature, ethics and customs."

Rouhani further rejected Trump's demand that the 2015 nuclear deal between Iran and 5+1 be revised, saying the agreement would remain intact and no article or paragraph would be added or taken away from it.

"Many countries supported former Iraqi dictator Saddam Hussein during the imposed war against Iran in the 1980s but they failed to defeat the Iranians," President Rouhani said, adding "apparently, the Americans have forgotten that in the 8 years of defense against aggression, the United States in a statement backed the aggressor and defended the adversaries and invaders during the chemical bombardment of Sardasht and Halabja, rather than support for the oppressed."

Trump does not know anything about international law, Rouhani said, adding "one president alone cannot abrogate an international deal; he apparently does not know that this is not a bilateral deal between Iran and the United States, so that he can do whatever he wants."

"A nation that adheres to democracy thanks to its culture and faith and respects international regulations is not a rebel; the country which kills hundreds of thousands of people with bombs in everywhere, from Vietnam to Latin America and to other countries is the rebel. US claims to fight against using nuclear weapons, while it is the only country that used them against another country, not once, but twice," he noted.

Accusing US of regional crises, Rouhani said "you created the regional wars; did you forget what you did to the people of Afghanistan, Iraq, Syria and other countries?"

You voice concern about Iran's missiles? You sell your weapons to the aggressors and threaten the oppressed Yemeni people with bombs and planes. You never objected to these aggressions and entered the region into crisis, he noted.

He further emphasized that Iran will continue its cooperation with the IAEA in the framework of international treaties and agreements.

"Tonight, it became apparent that the JCPOA is a far stronger agreement than what Trump had previously assumed,” Rouhani said. "Trump said he intends to add some articles to the JCPOA with the help of his Congress, but they must know that they can do no such thing.”

The Iranian president went on to address Trump’s allegations against IRGC, noting Washington’s support for certain Arab regimes that have never held elections, the downing of an Iranian passenger flight, and their attacks on Iranian oil rigs; "we have always been resolute to defend our country, and we are even more so now,” he stressed.

President Rouhani further highlighted Iran’s compliance with the JCPOA "as long as the agreement meets our interests”, adding "we will continue to work with the IAEA as long as our rights and interests are preserved under this international agreement. If our interests cease to be met under the deal, we will not hesitate to make an appropriate response.”