TEHRAN (Basirat) : President Hassan Rouhani, among many other senior Iranian officials, has denounced the deadly attack on a mosque in Egypt on Friday as a “heinous terrorist crime,” expressing sympathy with the bereaved families. 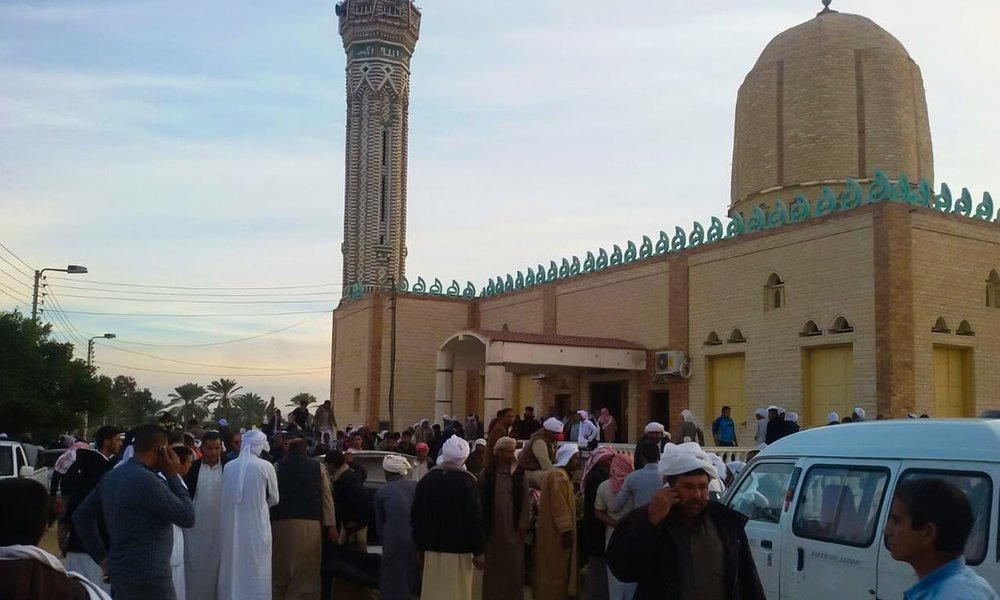 "Condemning the heinous terrorist crime during Friday Prayers in Egypt, I extend Iranian people's and my sincere condolences to the Egyptian people and the bereaved families of the victims,” Rouhani said in a message posted on his official Twitter account on Saturday.
At least 305 people were killed and 128 were injured when dozens of armed men carried out an assault on the al Rawdah Sufi mosque in Bir al-Abed, Sinai.

The attackers arrived in five SUVs and were armed with automatic machine guns, according to a statement from the public prosecutor read out on Egyptian state-run news channel Nile TV. They took position in front of the mosque and its entrances.
The statement said the attackers were wearing military fatigues and were armed with heavy machine guns. One of those who entered the mosque was carrying an ISIS flag, it said.
‘Cowardly hand of terrorism’
Iran’s Foreign Minister Mohammad Javad Zarif denounced the attack as a "cowardly” act.
"Once again the cowardly hand of terrorism targeted the dear nation of Egypt and proved one more time that terrorism considers no difference between divine and human values as it does not differentiate between places even if they are mosques and place of worship,” Zarif said in a message in Arabic posted on his twitter account on Saturday.
"I strongly condemn this heinous act of terrorism and ask God to give his blessing to the martyrs of the incident and bring quick recovery to the wounded,” the minister added.
Egypt’s President Abdel Fattah el-Sisi announced a three-day nationwide mourning following the deadly attack.
Parliament Speaker Ali Larijani also offered condolences to the Egyptian people, parliament and government over the loss of innocent lives.
In a message to Egypt Parliament Speaker Ali Abdel Aal, Larijani wished patience and peace for the bereaved families.
"Eradicating all shapes of terrorism needs the international community’s collective effort and all countries’ cooperation in order to fight the ideological origin and supporters of these criminal Takfiri groups,” he said.
Attack on the mosque was the deadliest in Egyptian history.

The Iranian Foreign Ministry also issued a statement on Friday denouncing the mosque attack.
"Undoubtedly, the Takfiri terrorism that is suffering the heaviest defeats these days in the region does not refrain from making any desperate effort and ruthless move to assert its existence once again,” ministry spokesman Bahram Qassemi explained.
"This sharply increases the responsibility of regional governments to gain a real and accurate understanding of terrorism and to seriously and collectively counter it,” he said in a statement, the ministry’s website reported.