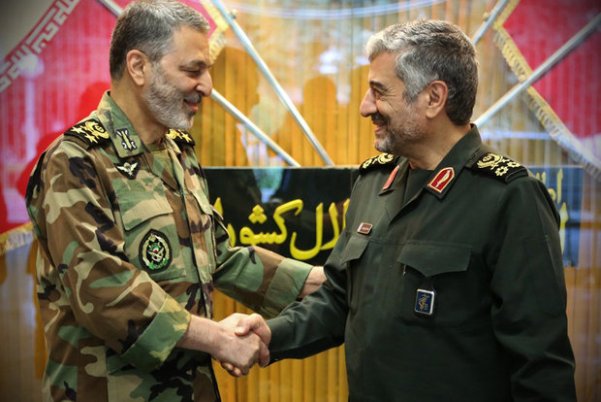 They expressed satisfaction with the magnificent and strategic victories of the Islamic Resistance Front against Takfiri terrorism and the undermining of ISIL self-proclaimed caliphate and discussed the necessity of increasing cooperation and coordination between the army and IRGC in order to boost army, navy, air force and missile powers.

Major General Mousavi congratulated the National Week of Mobilized Forces (Basij) and thanked Basij dedicated services to the Islamic Revolution and the Iranian nation and added "Basij has played a strategic, fateful role in the revolution and has been especially active in cultural and social fields as well as resisting threats of the enemy during the Iran-Iraq war.”

Army Chief General Mousavi expressed satisfaction with the cooperation between army and IRGC and called their coordination a great protection for Iran.

For his part, Brigadier General Jafari asserted the common objective of army and IRGC in providing support for the public and said "the role army and IRGC play in providing support and services for the public, similar to what happened after the disastrous earthquakes that shook western Iran, is an important aspect which will be developed more fully along military missions.”