TEHRAN(Basirat): An Iranian top commander has criticized the upcoming visit of France’s Minister of Foreign Affairs to Iran asking what is the goal of Jean-Yves Le Drian’s trip while Paris was part of an effort to adopt an anti-Iran resolution last week. 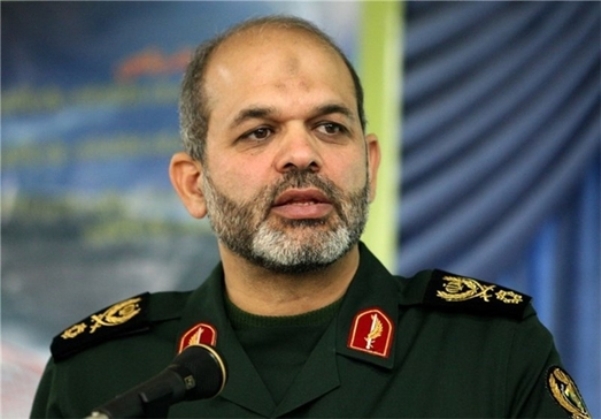 Brigadier General Ahmad Vahidi, President of the Supreme National Defense University of Iran, asked in a ceremony in Tehran that what is the purpose of the visit of Le Drian to Tehran in a situation that last week France in collaboration with the US and Britain tried to pass an anti-Iran resolution on the issue of sending missiles to Yemen?

"It was an anti-Iran resolution on pretext of Tehran’s support for the oppressed people of Yemen who have been under the heavy bombardments of Saudi Arabia during the past three years with the weapons that the Western countries have provided for the Saudis,” added the Iranian general.

The IRGC General also noted that not only will Iran not surrender to the policies of the global arrogance, but it will not allow the western countries to discuss its missile program.

"What has happened that the western countries, who have the blood of our youths on their hands, allow themselves to make decisions for Iran and the region?” pointed out Vahidi.

As announced by Iran’s foreign ministry, Le Drian and the high-level delegation accompanying him will arrive in Tehran on March 4 to hold talks with FM Zarif and other senior officials of the Islamic Republic of Iran.

A UK-drafted resolution aimed at pressurizing Iran over alleged weapons supplies to Yemeni fighters failed at the UN Security Council.

The resolution gained 11 favourable votes at the 15-member Security Council but was halted by Russia’s veto. France was among the countries supporting the resolution and voted in favor of it.