TEHRAN (Basirat): A major focus of analytical pieces in recent days has been the visit of Saudi Crown Prince Mohammed Bin Salman to London last week, during which huge deals were signed between the two countries.

The Persian-language Basirat website has explored the motives behind the conclusion of the contracts estimated to worth tens of billions of dollars.

Following is the full text of the article:

The recent trip of Saudi Crown Prince Mohammed bin Salman to the UK has caught the attentions of political circles across the globe. A peak moment during the trip, which was aimed at expansion of diplomatic and economic ties between Riyadh and London, was when Saudis signed a provisional agreement with the British Government to buy 48 of the UK’s Typhoon fighter jets. The agreement, estimated to worth some £10 billion, has been in the making for years.

It seems the western arms manufacturers have entered a tough competition for dominating markets in the region, particularly in the oil-rich Arab kingdoms surrounding the Persian Gulf. A major factor contributing to the expansion of arms trade in the region is the Yemen war, which has boosted demand for weapons from Saudi Arabia and the UAE. The Amnesty International has slammed the arms deal, saying it is "adding fuel to a humanitarian fire” in Yemen. The British Labour Party and some anti-war groups have also condemned the contract. However, the UK Defence Secretary Gavin Williamson has defended the pact, saying the Crown Prince's visit has opened a new chapter in the two countries' historic relationship.

During the three-day visit, bin Salman and British officials discussed ways to develop strategic cooperation between the two countries, especially in the military sector.
They also discussed the wide-ranging opportunities in Saudi Arabia following the introduction of the Kingdom’s Vision 2030, as well as so-called international and regional developments and efforts to combat terrorism and extremism .

In a joint statement issued late Friday, Saudi Arabia and the UK affirmed their long-term partnership in various areas. They also stressed the importance of reaching a political solution to the crisis in Yemen on the basis of the Persian Gulf Cooperation Council Initiative, claiming it could ensure Yemen’s "security and territorial integrity”.

The call for political settlement of the conflict in Yemen comes as the Saudi war machine continues to bombard the poorest Arab country, extending the list of Saudi war crimes and rights violations in Yemen. 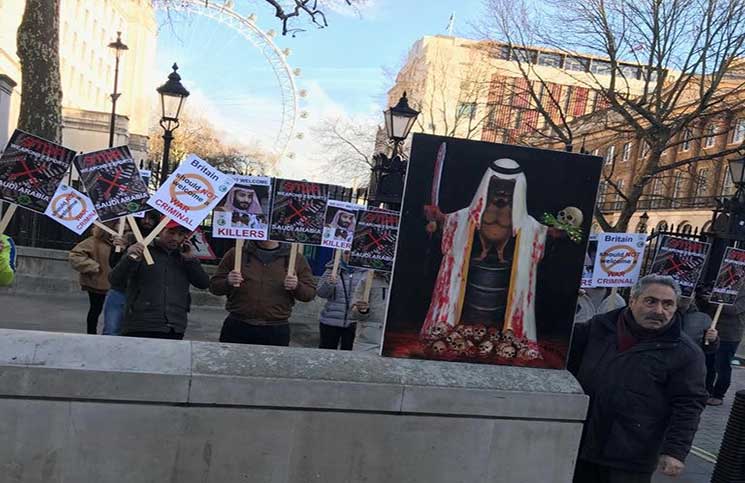 On Wednesday, the Crown Prince and British Prime Minister Theresa May launched the annual UK-Saudi Strategic Partnership Council as a key mechanism for discussing and developing all aspects of the bilateral relationship.

The UK and Saudi Arabia also agreed a goal of $90 billion of mutual trade and investment in the coming years.

But what was the motive behind the flurry of deals?

London is after strengthening its bilateral relations with traditional allies after the Brexit referendum held last year, in which most of the British people voted for the exit of their country from the European Union.

The UK economy needs strong markets that embrace UK exports, and the oil-rich kingdom is a perfect option. The British officials have announced the new arms contracts with Saudis will create hundreds of jobs inside the country.

A string of cultural reforms in recent months initiated by the Crown Prince, including a decision to allow women to drive, which are part of a 15-year reform program that Saudi officials say aims to overhaul most aspects of life in Saudi Arabia, has paved the way for closer cooperation between London and Riyadh.

The other factor encouraging closer relations between Riyadh and London is their hostility toward Tehran and their efforts to curb what they call Iran’s regional influence. That’s why Saudi Arabia embraces the assistance of British experts in its efforts to deal with the so-called Iranian threats.

On the one hand, Mohammad bin Salman seeks to attract global support for domestic economic and cultural reforms. On the other hand, the crown prince is after assuring foreign investors of a safe and stable legal system to protect their interests.

However, the path of expansion of London-Riyadh relations is not free of obstacles. The huge arms contracts could lead to objections by the UK’s western rivals. Besides, the Saudi bombardment of Yemen using British bombs will tarnish the reputation of both countries across the globe.

The Saudi crown prince also faces big challenges in pushing through reforms inside Saudi Arabia. The hasty implementation of reforms will lead to negative reactions from the conservative Saudi society. Moreover, the success of the reform plan hinges on real openings in the domestic politics, which means giving people freedom and democracy.

The Saudi prince has also a tough job in confronting Iran. In recent years, Saudis have received heavy blows from the resistance axis in various regional conflicts, particularly in Iraq, Syria, and Yemen. Riyadh believes the western support will help it contain Iran. However, the house of Saud should be aware that the western powers seek only their own benefit and depending on them is no good to Riyadh.