Students across US walk out over gun violence

TEHRAN(Basirat): Thousands of students across the United States have walked out of classrooms to protest against gun violence prompted by a deadly rampage at a high school in the state of Florida last month. 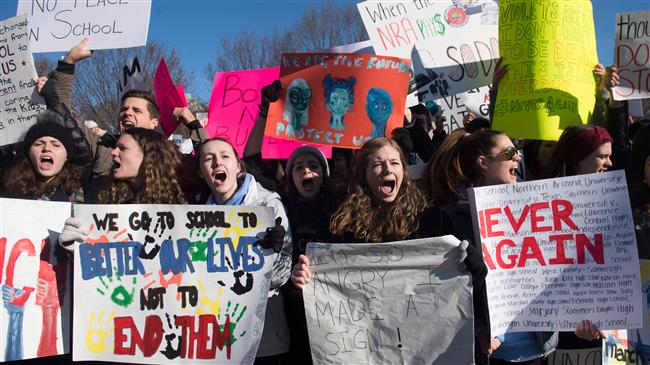 The walkouts were scheduled to last 17 minutes to commemorate the 17 students and staff killed at Marjory Stoneman Douglas High School in Parkland, Florida, on February 14.

But it quickly became apparent that many students around the country decided not to go to classes at all and to demonstrate instead.

While many school districts gave their blessings for the protests, students in some areas defied warnings of discipline to join the walkout.

Some students made an early start. At Fiorello H. LaGuardia High School in New York City, crowds of students poured into the streets of Manhattan, many dressed in orange, the color of the gun-control movement.

Hundreds of students from schools in the Washington area gathered near the White House chanting "Never again!" and "Enough is enough!" and holding signs reading "Protect People Not Guns."

"We want to show Congress and politicians we are not standing by, we are not silent anymore," said Brenna Levitan, a 17-year-old who goes to high school in Silver Spring, Maryland, just outside Washington. "Parkland is going to be the last school shooting."

At a high school in Cherry Hill, New Jersey, students marched to the football field and assembled in a heart formation to pay tribute to the victims.

President Trump backpedals on age limits for some gun purchases but focuses on arming teachers.

The nationwide protest is being held one month to the day after Nikolas Cruz, a troubled 19-year-old former student at Stoneman Douglas, massacred his one-time classmates.

Some of the survivors have lobbied state and federal lawmakers, and even met with President Donald Trump, to call for new restrictions on gun ownership, a right protected by the Second Amendment of the US Constitution.

The Parkland survivors' efforts helped bring about a tightening of Florida's gun laws last week, when the minimum age for buying any kind of gun was raised to 21 years from 18, although lawmakers rejected a ban on the sort of semiautomatic rifle used in the Parkland attack.

The Trump administration plans to help arm teachers to deter school shootings, a controversial idea that has drawn little support from educators, including the National Education Association, the country’s largest teachers lobby.

On Friday, Florida Governor Rick Scott signed into law a gun control bill that was passed by the state’s legislature. The new law raises the minimum age to purchase a firearm from 18 to 21 and extends the waiting period to three days, a dramatic turnaround in one of the most gun-friendly states in America.

The NRA immediately filed a lawsuit at a US federal court in Florida after the gun control bill was signed into law, arguing that it violated the US Constitution.

The NRA has become the focus of a growing movement by activists who are demanding that US politicians stop accepting political donations from the gun lobby.