TEHRAN(Basirat): Iran’s Permanent Representative to the UN Gholam-Ali Khoshroo in his speech considered occupation of Palestine by the Zionist regime as the main factor of all conflicts in the Middle East. 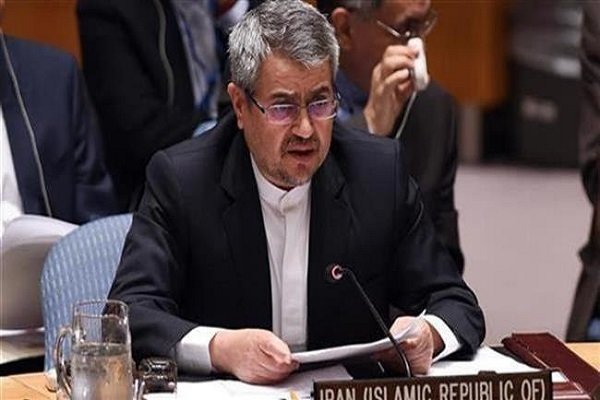 Recent meeting of United Nations Security Council (UNSC) was held in Gaza Strip with a focus on the critical situation in the Middle East and also fresh crimes and atrocities of Zionist regime in killing and injuring dozens of Palestinians.

He also referred to the occupation of some parts of Syria in Golan Heights by the Zionist regime and reiterated, "an Israeli official has recently acknowledged that his country has conducted more than 100 airstrikes to Syria and Lebanon, so that these aggressive acts contravene international norms and laws.”

The countries that support Israel in waging war against the oppressed people of Palestine should be held accountable for their heinous acts, he emphasized.

Elsewhere in his remarks, Iran’s envoy to the United Nations strongly condemned the decision taken by the United States to declare Al-Quds (Jerusalem) as the capital of Israel and relocation of its embassy to this holy land and said, "such measures are as clear violation of international laws and regulations.”

He called on the UNSC to take urgent measures in this respect, otherwise, it will lead to deterioration and aggravation of situation in the Middle East region.

Iran’s UN envoy emphasized, "if the UN Security Council is serious about establishing peace and security in the Middle East region, it should take immediate action against warmongering policies of Israel in the region.”

While expressing the strong support of the Islamic Republic of Iran for the oppressed people of Palestine, he said, "Iran will spare no efforts in this respect to back inalienable and legal right of Palestinian nation as an independent country.”