In the early 20th century when the Europeans were busy with their frustrating internal differences and conflicts, the Americans managed to rise as a global hegemon. 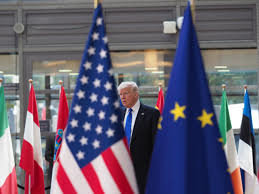 By Payman Yazdani
Long standing conflicts in Europe which resulted in the Europeans weakness is one of the key reasons that paved the way for the U.S. political, economic and military rise as a global power and its domination on Europe.
After the World War II during the Cold War, economic and military weakness of the Europeans and common goals like containing the former Soviet Union led to increasing economic, political, cultural and security transatlantic cooperation and partnership.
Besides transatlantic cooperation, Europeans tendency to avoid another possible conflict in Europe resulted in further inter-European cooperation despite many differences. Following the collapse of the Soviet Union and end of Cold War, inter-European cooperation accelerated and entered a new phase. Finally increased social, economic and political cooperation resulted in formation of the European Union (EU) which for the first time let Europeans to adopt a unified integrated foreign policy.
Despite the EU weaknesses in the field of security and its dependence on the U.S. for its security the Union in two decades managed to be the best model of regionalism and turn into an economic superpower.
According to World Bank figures in 2017, representing 24.3 percent of the global economy the United States is still the largest in the world and respectively the EU and China are the second and third biggest economies of the world representing 21.37 and 14.8 percent of the world economy. A report by Forbes on February 29th in 2016 indicates gradual decline of the U.S. economic hegemony and domination on world economy over the past 4 decades. Since 1960 to 1964 the U.S. represented 40 percent of the world economy but in 2014 following the rise of the EU and China economies the U.S. just represented 22 percent of the world economy.
The rise of the EU as an economic power as a serious rival of the U.S. and in addition, some tendencies inside the EU member states to gain more military and security independence from the U.S. is not something that can be ignored by Washington.
Recent global developments in the world and Europe has made the Americans to make efforts to change the post-World War self-created regimes and orders that no longer serve the Washington interests. Many believe that Donald Trump is the result of political engineering of the U.S. establishment to this end. In fact, the process of containing the EU and changing self-created old orders and regimes to guarantee the U.S. global economic, military and political hegemony started when then U.S. President Georg W Bush divide Europe into old and new Europe. Later Barak Obama followed the same policy softly and paved the way for Donald Trump who is bold enough to follow the policy without respecting international law, norms and curtsy.
Washington has adopted the following tactics over the past couple of years to contain the EU as its rival and maintain its military and economic domination on the Union:
- Creating more tensions between the EU and Russia and imposing more and more sanctions against Russia to push Moscow out of EU energy market which will mean more EU economic dependence on Washington.
- Intensifying tensions between the Europe and Russia in East Europe to maintain Washington’s military presence in the continent to guarantee its military hegemony and continuation of arm sale.
- Supporting the UK exit from the EU to reduce the EU’s military and global economic weight. The UK exit from the Union as a country representing one sixth of the EU economy, enjoying veto power in the UNSC and nuclear weapons means a serious blow to the EU’s global economic, political and economic stances to the benefit of the U.S.
- Withdraw from Paris Climate treaty and triggering trade war with the EU contrary to international law and WTO regulations which aim to impose Washington’s political and economic will on the Union and at the same time to create differences among the Union member states.
- Prolonging crises intentionally in the EU neighboring regions like Syria and Libya which has created a lot of economic, political and social problems for the EU member states and gaps among them.
Pondering the U.S. approach toward the EU shows that the policy and tactics adapted by Washington toward developments in East Europe, Ukraine, imposing sanctions against Russia, crises in Syria and Libya resulting millions of refuges, withdrawing from some international treaties like Iran’s Nuclear Deal and triggering a trade war is after two main aims:
-Sending a message to the world that even the EU as the most successful model of regionalism is not able to challenge Washington and finally has to give up to the U.S. will.
-Deepening existing differences and creating new gaps and differences among the Europeans by adopting the approaches which finally will indirectly and softly help the re-rise of the rightists in Europe, the main factor as I mentioned above for the rise of the U.S. as an economic and military power at the beginning of the 20th century.
Source: Tehran Times