TEHRAN (Basirat): At the very first time Donald Trump got into the White House, believed himself as having a different policy toward the Islamic Republic and Iranian nation and to accomplish something which his predecessors did not manage to do so. Then, he along with his hawkish cabinet egotistically hatched a treacherous plot to whether overthrow the Islamic Republic Establishment or at least compel it to meet the US 's demands. 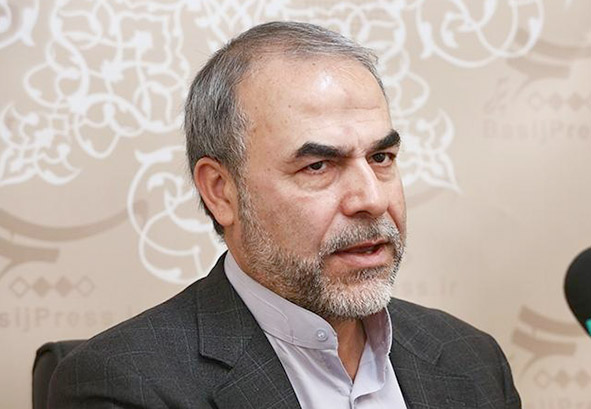 This is The Chairman of IRGC Political Department General Yadollah Javani 's viewpoint in an exclusive interview with Sobhe Sadegh Weekly.

He further added : By pulling out of the Iran nuclear agreement known as JCPOA, Donald Trump started implementing primary phase of his nasty scheme and had undoubtedly assumed his victory over the issue beforehand. "The same US 's former presidents fate" was something that has been anticipated by the leader of Islamic Republic of Iran Ayatolla Khamenei for Donald Trump in respond to his awkward and childish manner of speech addressing the Islamic Republic.
Ayatollah Khamenei in his recent remarks among senior officials of the Establishment outlined the result of Trump 's inevitable failure in realization of his dreams is like something that the US 's former presidents Georg w Bush and Ronald Reagan had experienced long before. He also highlighted, "During their administrations, they also used to develop the idea of overthrowing Islamic Republic Establishment and had adopted hostile policies toward us  but never managed to materialize their dream".
He further reiterated " even, that former US president which used to say- I am not pursuing the scenario of the regime change in Iran -  was secretly doing so" .
According to recent tangible indications, Trump 's intrigue failed to materialized earlier than it was expected. In his plan It was supposed to make the Iranian oil export down to zero by November 4 as if Iran become completely blockaded. They thought by implementing this plan along with economic and psychological war, would manage to make the fortieth anniversary of Islamic Revolution victory, the end of the regime’s lifetime.
After introducing the first phase of their plan and threatening all countries importing oil from Iran to whether capitulate to US 's demands and halt their trade with Islamic Republic or face severe sanctions, US officials embarked on wandering in international level in order to convince other powers to put more pressure on Islamic Republic, which was the second phase of their plan.
American senior diplomats 's meeting with other countries leaders including Donald Trump 's latest visit to Russia was in line with the above mentioned target. but the turning point in all of these gatherings was not something except refusal to US 's illogical requests.
Further Vladimir Putin expressed his concerns over the withdrawal of US from the Iran nuclear agreement known as joint comprehensive plan of action(JCPOA) which was achieved in Vienna in 2015 after years of negotiations among Iran and the Group 5+1 (Russia, China, the US, Britain, France, and Germany), and emphasized his determined policy of having mutual relation with Islamic Republic.
Subsequently it was broadcasted by all Russian and non-Russian medias which Trump 's attempts for convincing Putin was the main issue of their private discussion.
meanwhile the most transparent political position which was declared by Russian officials in respond to US 's demands could be the Levan Dzhagaryan 's viewpoint (Russian ambassador to Tehran) which describes Iran as a country that have an independent foreign policy and never yield to oppressive pressures. Rather, through conviction and diplomacy, everything such as multilateral cooperation with Iran would be obtained. He further underscored that Iran-Russia bilateral economic and commercial ties are being expanded and named some of the common major projects underway in Iran by Russian entrepreneurs.
China has explicitly stated that is not going to follow US's unilateral sanctions against the Islamic Republic and will keep on its collaboration with Iran as before.
China 's foreign ministry spokeswomen following the US 's pressure and frequent ask to end trade with Islamic Republic expressed "Beijing is not in line with US ‘s unilateral sanctions against Tehran especially regarding to oil imports and will not go with the issued sanctions".
Not long ago some American delegates composed of State Department and Department of The Treasury diplomats in a meeting with Turkish officials endeavored to persuade them to follow US sanctions against Tehran, but afterwards Turkey ‘s foreign ministry announced "Iran is our neighbor and regional ally”
Turkey ‘s officials have frequently outlined they will not support US oil-related sanctions against Iran and would not break up with Tehran for the sake of Washington.
The above mentioned positions adopted by major countries and some others, demonstrates that economic blockade of Iran is a premature failed plan.
" Iran is a country in which regarding to its geopolitical status and its high capabilities will not be blockaded " .
Trump and his colleagues in the White House will soon realize this fact and understand which, Iran is a durable and determinant power not in the region but in global scale.