TEHRAN (Basirat): Austrian Ambassador to Tehran Stefan Schulz underlined continued attempts by his country and other European states to help Iran maintain its financial channels with the world after the US sanctions. 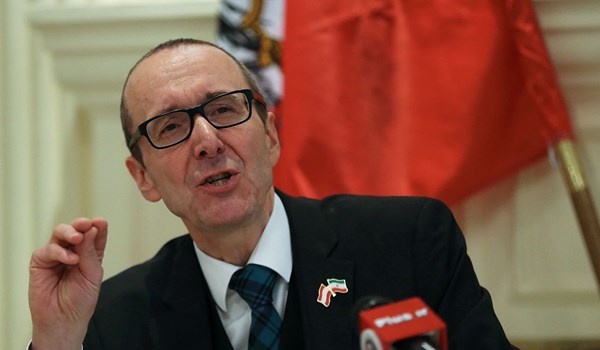 "The EU's main objective is maintenance of financial and communication channels so that Iran can enjoy the benefits of the international(ly-endorsed 2015) nuclear deal," Schulz said in the Central city of Yazd on Saturday.
He added that the EU and Austria are ready to help Iran pass through the present sanctions conditions.
Schulz said that new energies and solar energy, tourism industry and proper water use methods are three fields for Austria's investment in Iran.
"97% of the Austrian companies are small and mid-size firms and they can be effective in the growth and development of Iran and Yazd (province)," he added.
In relevant remarks in June, Schulz underlined his country's willingness to cooperate with Iran in the construction of logistic rails at the country's ports.
"Austria has experience and new technologies in railway and logistics rail and we are ready to expand cooperation in academic and training fields by introducing capable companies and institutes to Iran's Ports and Maritime Organization (PMO)," Schulz told reporters after his one-day visit to Hormozgan province in Southern Iran.
He also expressed the hope that the grounds would be provided for joint cooperation and discussions between Iran and Austria in marine and ports areas, water management, organic agriculture, tourism and logistic rails.
Also, in April, Iranian Ambassador to Austria Ebadollah Molayee underlined that Tehran and Vienna had agreed to expand their mutual cooperation, specially in economic and industrial sectors.
"Tehran and Vienna have held important meetings on enhancing economic and industrial relations," Molayee told reporters.
He underlined that the draft of the document of the 9th joint economic commission meeting is supposed to be signed by both countries.
"The joint commission and its roadmap is a suitable framework for maintaining cooperation in energy, mine, transportation, tourism, technology, infrastructure, agricultural, health, banking, environmental, educational and academic fields," Molayee added.
The Iranian ambassador underlined that cooperation between Iran and Austria is not limited to trade exchanges alone, but rather covers all-out economic ties, attraction of investment and sharing of technological know-how.
"Signing of various MoUs and contracts has provided a suitable framework for enhancement of cooperation," he said, adding that the volume of economic exchanges between the two countries hit 420 million euros last year.