TEHRAN (Basirat): Iranian Navy Commander Rear Admiral Hossein Khanzadi announced that his forces would soon be supplied with a new modern home-made submarine which will surprise the enemies. 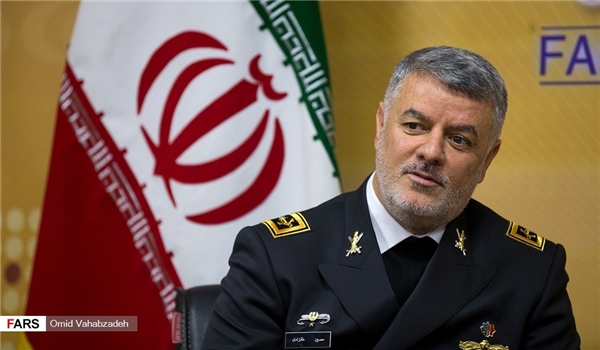 "Fateh submarine will join the Navy's fleet by the end of this (Iranian) year (started on March 21)," Rear Admiral Khanzadi said on Saturday.
He explained that different tests have been carried out on Fateh, adding, "Fateh is a Navy surprise for those who show us their claws and teeth."
Rear Admiral Khanzadi also said that Iran will continue progress in manufacturing and updating Fateh submarines until having a powerful subsurface fleet in the Southern waters of the country to safeguard Iran's security more powerfully.
In relevant remarks in June, Rear Admiral Khanzadi announced that the country's naval forces would soon be supplied with a new home-made destroyer named 'Dena'.
"Dena has been manufactured by the defense ministry's marine industries organization and it will join the army's naval fleet in the South soon," Rear Admiral Khanzadi told FNA, adding that Dena is the latest version of Mowj-class vessels.
He also said that the construction jobs and naval tests on the home-made destroyer, Sahand, are also being accomplished, adding that it will be put into operation by the end of this fall along with Dena.
"Fateh submarine which is the first mid-class submarine built by the Islamic Republic of Iran will also be unveiled soon," Rear Admiral Khanzadi said.
He also referred to efforts to overhaul Damavand, a destroyer which sunk in the Caspian Sea in January after it suffered damages during the stormy weather of Anzali Port in Northern Iran, and said overhaul of the giant vessel will end by the yearend "and it will have the same, and even more, capabilities in less than two years".
Source: FNA