TEHRAN (Basirat) : Finally, Emmanuel Macron, the French President, had no way but to withdraw from his previous positions in the face of Paris recent riots, declaring an “economic and social state of emergency”. Macron ordered the government and parliament to take immediate steps to change tax rules and other policies that hit the French citizens. 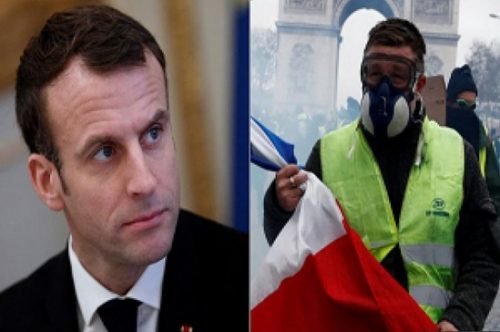 He also promised to pay attention to the protesters’ demands. Macron’s reforming measures include:
• A government-funded 100-euro increase in the minimum wage starting at the beginning of the new year
• The abolition of taxes on overtime pay in 2019
• Asking profit-making companies to give workers tax-free year-end bonuses
• Slashing a tax hike on small pensions, acknowledging it was "unjust.”
In a 15-minute speech from the Elysee Palace which was covered by the media, Macron told the French people that he accepted his share of responsibility for the crisis. The French young President struck a rather humble in his remarks, which wasn’t usual for him.
The "Gilets jaunes" protests, which have seen the worst riots in France for decades, began on 17 November over the government’s plan to raise taxes on diesel and gasoline, but by the time Macron bowed to four weeks of violence and abandoned the new fuel tax, protesters were demanding much more.
It’s to be noted that according to polls results, Emmanuel Macron’s popularity has hit new lows. The French President has been called the "president of the rich" by critics. Many of French workers and low-income citizens are severely discontent over the combination of low wages, high taxes and high unemployment that made lots of financial troubles in their lives.
In his televised remarks, Macron said; "We will respond to the economic and social urgency with strong measures, by cutting taxes more rapidly, by keeping our spending under control, but not with U-turns”.
After Macron’s concession, Jacline Mouraud, one of the spokespeople for the yellow vest movement, said that it "comes much too late, unfortunately”.
"It’s on the right path, but in my opinion, it will not fundamentally change the movement,” she said.
The fact is that France is stuck in long-standing social and political problems. Unemployment rate is high, and Macron’s policies couldn’t satisfy the French about solving this critical problem. Sheri Berman, the professor of political science at Barnard College, points out to this issue, says; "Macron came to power promising to deal with these and other problems, but the reforms thus far led many to dismiss him as another member of an out-of-touch elite.
His aloof personal style — and several well-publicized disparaging remarks to those less well-off, including that they should "stop whining” and simply "cross the street to find a job” — lead growing numbers of citizens to view him the "president of the rich.” As the protests swelled, the yellow vests’ anger became increasingly aimed at Macron and, more generally, at an establishment that seems unwilling or unable to address their needs.”
She continues; "Macron faces the most serious crisis of his presidency, with popularity numbers at a new low — matching the worst figures achieved by his predecessor, François Hollande. The yellow vests, on the other hand, have approval ratings of over 80 percent.”
The Yellow Vests movement highlights tensions and weaknesses which are remarkable in into Macron’s approach. Macron should admit that in a country suffering economically, his so-called reforming goals will naturally run into opposition. One of the protesters pointed to this issue and said; "We are talking about cost of living and Macron is talking ecology. … [Macron’s] solution for people who can’t afford food by the end of the month is to buy solar panels and electric cars.”
While Macron had previously noted that he wouldn’t be swayed by street protests, in an initial attempt to quell the riots, he agreed last week to cancel a planned increase in anti-pollution fuel taxes. But this measure was considered as too little, too late by the protesters who are trying to press for further concessions on reducing inequality.
Almost 136,000 people took to the streets last weekend – the same number as a week earlier. Over 4,500 people have been detained across France, police said. Protesters torched cars and stormed the Arc de Triumph, one of the most recognizable Paris landmarks, smashing the lower floors before ascending to the roof.