Tehran (Basiart) :On the anniversary of people of Qom's January 9, 1978 uprising, thousands of people from Qom met with the Leader of the Revolution, Ayatollah Khamenei, this morning January 8, 2020.The following is the excerpt of the statements his eminence made at this meeting: 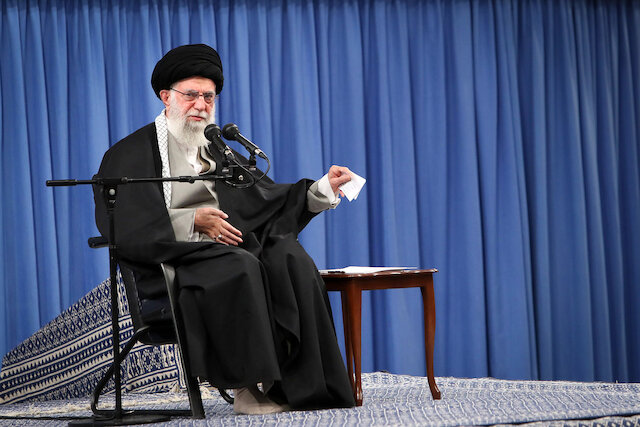 Source:khamenei.ir
US disgraced after assassination of Gen. Soleimani
Hajj Qasem helped the Palestinians to stand up and resist
Leader Urges Efforts to Familiarize Youths with Eminent Martyrs
The region's turbulent situation is due to the corruptive presence of the U.S. and its cohorts
“Era of Hit, Run Is over”
FM: Iran's Revenge Entails US Pullout from Region
Source: At Least 80 Americans Killed in IRGC Attack on US Base in Iraq
Iran’s Admin. Thanks IRGC for Retaliatory Attacks on US
Top General Warns of Iran’s Stronger Response to Any New US Attacks
General Soleimani's Body Laid to Rest in His Hometown
Iran Hits US Base in Iraq in Retaliation Attacks after US Killing of Gen. Soleimani
Iran Designates Pentagon as Terrorist Organization
Gen. Soleimani’s body in hometown for burial: Millions join Kerman funeral
Tags: basirat ، Ayatollah Khamenei ، Iranian nation ، Martyr Soleimani ، General Soleimani
Error Report
0