TEHRAN (Basirat) : A deputy commander of the Islamic Revolution Guards Corps (IRGC) slammed the US president’s new Middle East plan as a strategic mistake, saying the so-called deal of the century will only unify Palestinians in their struggle for the liberation of al-Quds. 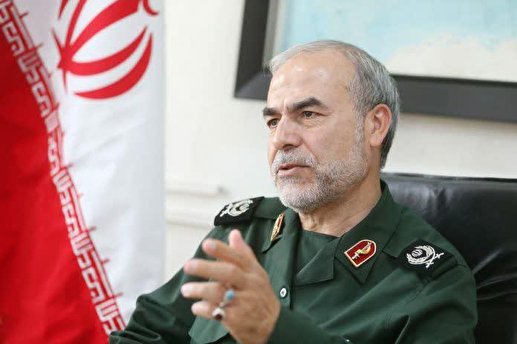 Speaking to Tasnim on Wednesday, IRGC commander’s political deputy, General Yadollah Javani, said Americans made a strategic mistake by announcing a one-sided plan for Palestine.
He said US President Donald Trump’s plan will be making the Palestinian struggles more unified, adding, “It seems that the Palestinian nation’s battle for the liberation of al-Quds will enter a new chapter.”
“Today, we can see that all Palestinian groups and characters as well as the Palestinian nation with any orientation have condemned such treacherous plan and deem it a failure,” he added.
Trump’s plan for Palestine is doomed to failure at the very beginning, Javani noted.
“The failure of such plan, in which the Palestinians have no role, is inherited in itself. In fact, Trump has unveiled the defeat of the big treason of the century with such measure,” the IRGC general added.
In a ceremony at the White House on Tuesday, Trump unveiled his long-delayed Middle East plan, a proposal Palestinian leaders called a "conspiracy" that "will not pass".
Following Trump's announcement, Palestinian President Mahmoud Abbas said "a thousand no's" to the plan.
Trump's initiative, whose principal author is his son-in-law Jared Kushner, follows a long line of efforts to resolve the conflicts between Palestine and the Zionist regime.