TEHRAN(Basirat): Spokesman of the Atomic Energy Organization of Iran (AEOI) Behrouz Kamalvandi reiterated that the latest round of US sanctions against his country’s nuclear chief Ali Akbar Salehi will have no impact on Tehran’s unstoppable advancements in the field of peaceful nuclear energy. 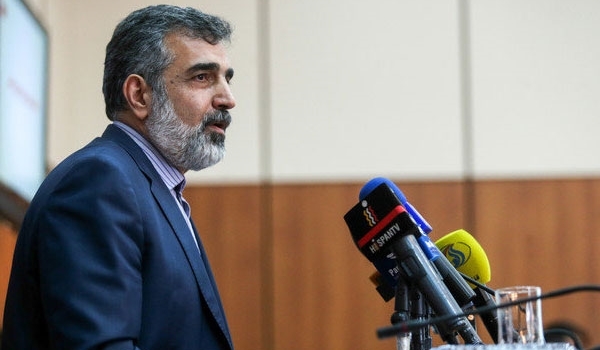 Speaking to Fars News Agency on Thursday, Kamalvandi said putting Salehi’s name on the list of persons subject to US sanctions against Iran, which was announced earlier in the day, was part of futile efforts by Washington, highlighting that such moves will have no practical value and proves desperation of the US in its faceoff with Iran.

He added that despite these sanctions, “Iran's nuclear program will continue with full force depending on the country’s needs,” underling that they will have no impact on the Islamic Republic’s resolve.

The US Treasury Department announced new sanctions on Salehi on Thursday, adding his name to the SDN (Specially Designated Nationals and Blocked Persons) List of the Office of Foreign Assets Control (OFAC).

Kamalvandi also reacted to remarks by Brian Hook, the US special representative for Iran, who has claimed that Washington has sanctioned the AEOI and its chief, because Iran had started new violations of its 2015 nuclear agreement with world powers.

Given its withdrawal from the deal and its breaking of promises it had made, the US “is in no position” to comment on the manner in which Iran adheres to its nuclear obligations, the spokesman concluded.

Washington left the historic accord, officially known as the Joint Comprehensive Plan of Action (JCPOA), in 2018, defying its multi-party nature and the fact that it has been ratified in the form of a United Nations Security Council resolution.

Last May, Iran began a set of nuclear countermeasures in retaliation for the United States’ departure. The measures were also taken in return for the US’s restoration of its nuclear-related bans against Iran, and failure by Britain, France, and Germany -- three European signatories to the deal -- to retain their business interactions with Iran despite the sanctions.

As part of the retaliatory steps, Iran stopped recognizing the limits set by the deal on the level of its uranium enrichment activities and the volume of its heavy water reservoir.

On January 5, the country said it would no longer observe any operational limitations on its nuclear industry, whether concerning the capacity and level of uranium enrichment, the volume of stockpiled uranium or research and development.

The decision came two days after a set of US drone strikes assassinated senior Iranian commander and the most revered anti-terror military figure in the Middle East, Lieutenant General Qassem Soleimani, in Baghdad.

Last Wednesday, Special Assistant to the Chief of the Atomic Energy Organization of Iran Ali Asqar Zare’an said that after the European signatories to the nuclear deal of 2015 failed to deliver on their commitments, Tehran undertook countermeasures which have further expedited its growth in the field of nuclear industry.

“Right now, if the [country’s] Establishment deems necessary, the Atomic Energy Organization [of Iran] will, in its capacity as the executor, have the capability to enrich uranium at whatever percentage of purity,” Zare’an said, while receiving some officials with Iran’s Islamic Revolution Guards Corps (IRGC) at the Fordow enrichment facility near the central city of Qom.

“Currently, the nuclear industry is one of the constituents of the Islamic country’s power and authority,” he added.

Zare’an detailed the most recent level of advancement attained by the country’s nuclear industry since the initiation of the countermeasures in order to refute erroneous data circulated by some media outlets.

After taking the fifth retaliatory step, the volume of the uranium produced by the country exceeded the 1,200-kilogram threshold, he said, adding, “The volume of the enriched uranium stockpile is being increased at full speed.”

After the conclusion of the nuclear deal, Iran reduced the number of its centrifuges to 6,104, he said. At Fordow, however, as many as 1,044 centrifuges are currently producing uranium, the official added, noting that the country was now producing 10 kilograms of uranium each day at under-five-percent purity level.

The country has indigenized all the components of nuclear fuel production cycle, nam

He hoped that the march towards self-sufficiency in the nuclear industry would, in the near future, lead to indigenization of operations at the Bushehr Nuclear Power Plant in Southern Iran and the heavy water production process.

The official underlined the importance of centrifuges to the fuel production process. He announced that the country was in the process of devising IR-9 generation centrifuges, whose output would stand at 50 SWUs (separative work units) -- the standard measure of work required to separate uranium isotopes. The output of the IR-8 centrifuges, which the country currently has in service, reaches 24 SWUs.

“One of the reasons behind the [international] hegemonic system’s outrage [at the advancement of Iran’s nuclear energy industry] is … that it sets other strategic industries in motion,” Zare’an said.

He said the country was now injecting gas into its IR-4 and IR-2m generation centrifuges to have them produce uranium.

The official also touched upon underway work aimed at completion of the Bushehr facility’s phase 2 and 3, whose operationalization would enable production of more than 22 billion kilowatt-hours of electricity.

If connected to the national grid, the dual stages together with the part of the facility, which has already been operationalized, would prevent the release of 21 million tons of contaminants into the air across the country, he said.