TEHRAN(Basirat): President Donald Trump’s Middle East 'peace plan' is based on racial oppression, a PR stunt for Benjamin Netanyahu ahead of election. It’s an Apartheid plan that should be rejected outright. 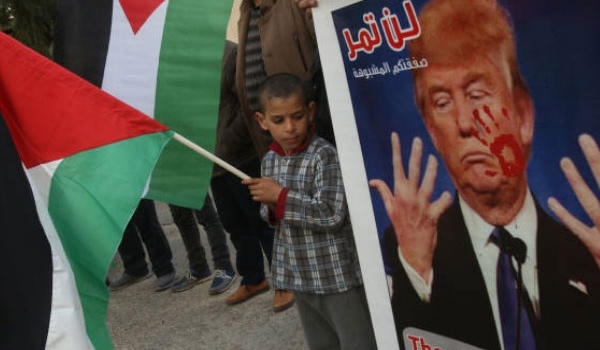 Trump unveiled his "deal of the century" on Tuesday, outlining what his administration is portraying as a plan to bring peace between Israel and Palestine. As always, Palestinians were not involved in the formulation of the plan nor its introduction to the public, and have firmly rejected it.

With his impeachment trial ongoing in the Senate, Trump unveiled the plan while standing next to recently indicted Netanyahu. The deal by the two losers truly seems ridiculous if it is called a "peace plan", given that the Palestinians are not involved. So it’s all is a question of the timing of its release.

Under the plan, the Palestinians will be granted limited autonomy within a Palestinian homeland that consists of multiple non-contiguous enclaves scattered throughout the West Bank and Gaza. The regime of Israel will retain security control over the Palestinian enclaves and will continue to control Palestinian borders, airspace, aquifers, maritime waters, and electromagnetic spectrum. The Palestinians will be allowed to select the leaders of their new homeland but will have no political rights in Israel. The apartheid regime will rule over them!

It is nothing less than Apartheid. It’s all about supporting Zionist control of Palestine, its people consigned to isolated cantons on worthless scrubland - statehood in name only without rights, resources or security. The plan physically and politically separates Palestinians by placing them within Areas A and B and Gaza, and declaring them citizens of that homeland.

The plan grants the Palestinian homeland autonomy over civil matters like education and healthcare, while critical areas such as trade, immigration, and security will remain under Israeli control.

The plan is also political sleight of hand: a thinly veiled attempt to claim that occupied Palestine is actually a Jewish-majority state. The Trump administration claims the homelands are a temporary solution. Once the indigenous population proves itself ready for self-governance they will one day be granted something that resembles a state.

This is wishful thinking. Per international law, in order for something to qualify as a peace plan between two warring parties, both sides have to be involved. That's not the case for the proposal Trump unveiled for Israel and Palestine.

Trump claimed the plan, which was roughly three years in the making, is a "realistic two-state solution" and would pave the way for the creation of a Palestinian state. He said Palestine would have a capital in parts of eastern Jerusalem, but also said "Jerusalem will remain Israel's undivided capital."

This makes clear that Israel's occupied territory will surround Palestine and it will be barred from having its own military or controlling its airspace, while all of its international agreements will be subject to Israeli approval. Put simply, Palestine will hardly qualify as statehood. Perhaps it is little more than a publicity stunt for the embattled Trump and Netanyahu to win elections. Perhaps.

Whatever this is, Palestinian President Mahmoud Abbas was quick to react: "Trump, Jerusalem is not for sale. Our rights are not for sale. Your conspiracy deal will not pass. The president declared the slap of the century, not the deal. We will respond with slaps. The deal was made according to policy set by Israel."

The resistance group of Hamas also rejected the silly plan: "We are certain that our Palestinian people will not let these conspiracies pass. So, all options are open. The occupation and the US administration will bear the responsibility for what they did.

In the prevailing environment, expect more clashes between the Palestinians and the Israelis. The problem with the apartheid plan is that it guarantees future conflicts because the Palestinians will never ever accept such an arrangement. It will make things worse, not least because it invites Israeli annexation and destroys the existing agreed-upon so-called peace framework.

Many more people will also get killed as a consequence and more blood will be spilled because of this disastrous nonsense. The only way ahead for the most disadvantaged and long-suffering Palestinians is resistance. Any other option for self-determination free from Zionist occupation will be short of reality.