TEHRAN (Basirat) : The Iranian people attending countrywide demonstrations in celebration of the 41st anniversary of the victory of the Islamic Revolution condemned the US crimes, including the assassination of Lt. Gen. Qassem Soleimani and pledged to take harsh revenge against Washington. 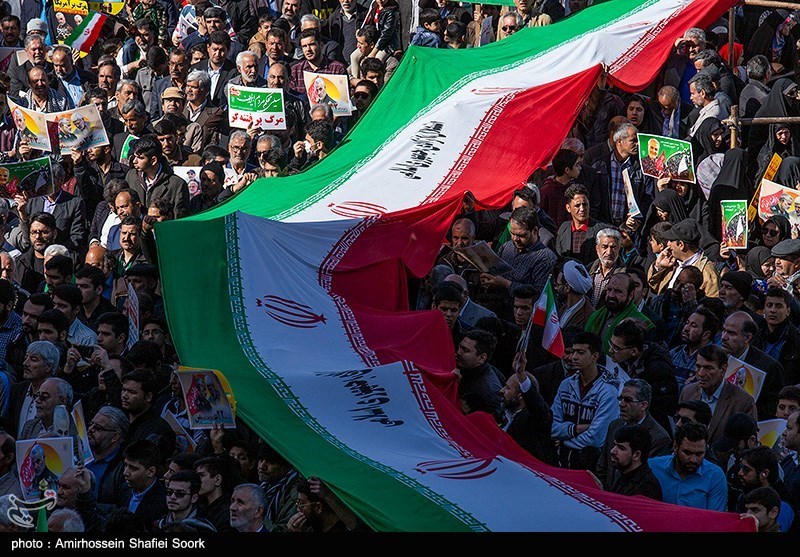 In a final declaration released after rallies in the capital, Tehran, and other cities on Tuesday to mark the anniversary of the Islamic Revolution, the demonstrators reaffirmed their commitment to supporting the Islamic Establishment and to continuing the path of Martyr Soleimani.
The statement also denounced the US as a “terrorist” regime and vowed to take “harsh revenge” against it.
“We, the participants in the epic marches of Bahman 22nd, regard the serious determination to take harsh revenge for the martyrdom of… Hajj Qassem Soleimani, the great combatant of Islam Abu Mahdi al-Muhandis, and their comrades against the Great Satan, the terrorist US, as a public demand,” the declaration read.
The demonstrator further emphasized that they are fully prepared for any kind of resistance and sacrifice to expel the American occupiers from the Middle East region.
The remarks come against the backdrop of increased tensions between Tehran and Washington after the US forces in Iraq assassinated Iran’s revered commander Lt. Gen. Qassem Soleimani.
General Soleimani, Abu Mahdi al-Muhandis, who was the deputy head of Iraq’s Hashd al-Sha'abi (PMU), and a number of their entourage were killed in a strike by American drones near Baghdad International Airport on January 3.
The White House and the Pentagon claimed responsibility for the assassination of General Soleimani in Iraq, saying the attack was carried out at the direction of US President Donald Trump.
In the early hours of January 8, the Islamic Revolution Guards Corps (IRGC) targeted the US airbase of Ain al-Assad in retaliation for the US move.
Nationwide rallies were held in Iran on Tuesday to mark the 41st anniversary of the Islamic Revolution.
The Iranian nation toppled the US-backed Pahlavi regime 41 years ago, on February 11, 1979, ending 2,500 years of monarchic rule in the country.
Source:Tasnim
Gen. Soleimani urged all Muslims to keep unity
Soleimani, star of the 41st birthday of the revolution
Tehran's Mosalla to Host Memorial Service for Martyr Soleimani
Iran to Punish Killers of Gen. Soleimani Sooner or Later: Judiciary Chief
US Assassination of General Soleimani and International Law
Tags: basirat ، Harsh Revenge ، Gen. Qassem Soleimani ، demonstrations ، assassination
Error Report
0