TEHRAN(Basirat): The US government rushed testing kits to a cruise ship quarantined off the coast of California on Thursday as the number of new cases and deaths related to the coronavirus in the United States continued to rise, but Washington has admitted that the country does not have enough coronavirus tests available to satisfy the demand despite previously saying that everyone can be tested. 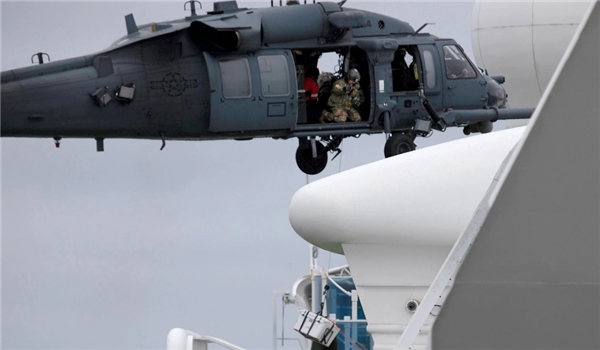 An additional person has died of novel coronavirus in King County on Thursday, according to the local health department, as Washington state health officials declared at a news conference that they now have 75 confirmed disease cases.

The new victim brought the total number of coronavirus deaths in Washington State to 13, driven by an outbreak at a nursing home in the Seattle suburbs. Eleven of the deaths have come at Evergreen Health Medical Center in Kirkland, near the nursing home. The state has had one other person die at a different hospital and another die at home.

Another victim, the 14th death in the United States, was confirmed in California.

There are nearly 230 cases of the coronavirus in 19 states of the United States, according to the US Centers for Disease Control and Prevention (CDC), as well as state and local governments, as several states have declared a state of emergency due the deadly virus outbreak.

Meanwhile, the fate of almost 3,500 people headed back to the United States remains a mystery as the cruise ship won't be allowed to dock anytime soon. The cruise ship, on its way back to California from Hawaii, was idling off the coast of San Francisco, as officials scrambled to confront the latest threat from the coronavirus and passengers panicked amid fears that they could be among the sick.

The Grand Princess previously carried a passenger who has become the first person to die from coronavirus in California. Dozens of passengers who were on the voyage with the ill man are still on the ship. At least two people who traveled with the passenger tested positive for the virus, while more than 20 people on board were showing symptoms.

Virus tests are underway for cruise-goers aboard the Grand Princess. The tests were delivered to the ship by a California Air National Guard helicopter. Nearly 100 passengers have been identified as needing to be tested, including guests and staff.

Dr. Peter Hotez, professor and dean of the National School of Tropical Medicine at Baylor College of Medicine, warned members of Congress Thursday against minimizing the risks of coronavirus in the United States, calling it “the angel of death for older individuals”.

“In an attempt to calm public fears, you’re hearing things like it’s a mild illness, this is like flu. It’s not really the case because this is an unusual virus. For many young people, especially, it is a mild illness, but we’re seeing some devastating things,” Hotez cautioned.

Hotez said he’s particularly concerned about first responders, health care workers and nursing homes, adding that when the virus entered the Life Care Center in Kirkland, Washington, it “rolled through it like a train” and led to several deaths.

The Centers for Disease Control and Prevention (CDC) posted a map of US states and territories with one or more labs that are using diagnostic tests for the novel coronavirus. All states are listed as currently testing for coronavirus, except Alabama, Maine, Ohio, Oklahoma, West Virginia and Wyoming as the states are listed as being in progress, according to the map.

Vice President Mike Pence stated that the United States doesn’t have enough coronavirus tests, at this point, to meet what officials expect to be the demand for them in the future.

“We don’t have enough tests today to meet what we anticipate will be the demand going forward,” Pence told reporters following a meeting with his coronavirus task force and executives from 3M in Minnesota.

“For those that we believe have been exposed, for those who are showing symptoms, we’ve been able to provide the testing,” Pence said.

He added the US "distributed 1,500 kits, with roughly 500 tests each so there’s roughly about a million and a half tests going out to hospitals".

Medical professionals note that many patients require multiple tests to confirm a positive test result, meaning that of the million and a half tests available, the number of patients who actually receive the tests will likely be much lower, until supplies and testing capacity are increased.

The secretary of defense said Thursday the department of defense is planning for a possible coronavirus outbreak at the Pentagon, the world's largest office building. Mark Esper told reporters that the department is looking at strategies that have proven effective for US Forces Korea, where there have only been six USFK-related infections, despite South Korea's high number of cases.

Meantime, US stocks finished sharply lower on Thursday, with all three major indexes closing down more than 3%.

Also, a new Hill/HarrisX poll finds more voters than a month ago believe the coronavirus will impact their personal lives as the disease continues to spread across the globe.

South Korean health authorities reported hundreds of new cases of the coronavirus on Friday, bringing to 6,284 the total number of infections nationwide. The Korea Centers for Disease Control and Prevention has declared that 42 people, mostly elderly with underlying illnesses, have died.

China's National Health Commission reported on Friday tens of new coronavirus deaths and nearly150 new infections as of the end of Thursday. Across China, the total number of deaths has reached 3,042 with the number of infections hitting 80,552.

The Asian Development Bank (ADB) said in a report the coronavirus outbreak could result in global economic losses of up to $347bln. The minimum losses are projected at $77bln, or 0.1 percent of global gross domestic product (GDP) while the maximum losses represent 0.4 percent of global GDP, the ADB reported.

Three more people have died from coronavirus infection in France on Thursday, taking the total to seven, while the number of confirmed infections rose to 423. A total of 23 people are in a very serious condition, Health Agency Director Jerome Salomon reported.

Italy reported 41 new deaths from the coronavirus, its highest single-day total to date, bringing the number of fatalities in Europe's most affected country to 148. The number of cases also jumped by a new high of 769, reaching 3,858 over the past two weeks.

The latest figures mean Italy has the second most deaths behind China, where the new virus was first detected at the end of last year.

"I am very sorry to report a patient in England who tested positive for COVID-19 has sadly died," he stated, adding the patient at the Royal Berkshire Hospital in Reading, West of London, was elderly and had "underlying health conditions".

At least 115 people had been infected in the UK as of Thursday.

Prime Minister Boris Johnson's Spokesman announced on Thursday British officials will accelerate preparations for the next phase of the coronavirus outbreak, which they expect to spread in a "significant way".

Germany on Friday reported 134 new confirmed cases of the coronavirus, the Robert Koch Institute reported. The number of cases rose to 534, up from 400 reported on Thursday evening.

NATO announced Thursday it had confirmed three cases of coronavirus linked to its military headquarters in Belgium - a civilian employee and two family members.

Europe is experiencing delays in supplies of medicines and face masks because of coronavirus disruptions, according to EU and industry officials, compounding already acute shortages of drugs on the continent. Also, airlines have been suspending flights or modifying services in response to the coronavirus outbreak.

The coronavirus has killed more than 3,300 people, the vast majority in mainland China. There are now more than 98,000 global cases, with infections in more than 80 countries and territories.