TEHRAN(Basirat): Venezuela is returning to the International Monetary Fund with a request for $1 billion in assistance after a bigger financial rescue package was rejected by the Washington organization over illegal sanctions. 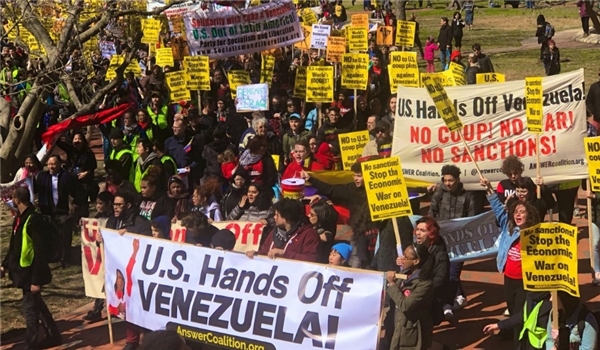 President Nicolas Maduro’s administration is arguing the emergency funds could be allocated through programs designed to purchase food, medicine and improve some hospitals’ infrastructure to care for coronavirus patients.

Amid the outbreak, US Secretary of State Mike Pompeo continues to warn that "every option is on the table" and that the Trump administration will galvanize a "global coalition to put force behind the voice" of those calling for the ouster of elected President Maduro.

Pompeo has even said that the "US will take action against those who oppose the peaceful restoration of democracy in #Venezuela," an apparent reference to those millions of voters who do not back a regime change to self-declared president Juan Guaido. Guaido seeks help from Washington to topple President Maduro and he has also said that "all options" are being considered, even asking the US to invade Venezuela.

Many US lawmakers and senators are also on board. Senator Marco Rubio, who has helped spearhead the US position on Venezuela, continues the not-so-subtle threats.

Once again, the United Nations is looking the other way. Silly how in the middle of all this the US government wants to send so-called $20 million of food and medicine aid to Venezuela, when the Trump regime has stolen $30 billion from Venezuela in oil revenue, and takes $30 million every day. It needs no comment – nor does the fact that the US-backed war on Yemen has pushed millions to the brink of famine, turned Syria into another war-ravaged state, and destabilized Libya forever.

Worse still, the US is waging illegal economic warfare against the people of Venezuela. From the sanctions to the freezing of assets to the blocking of Venezuela from the international financial system and the IMF, this is what appears to be driving that country over the edge amid the coronavirus outbreak.

As is the case, there are no legal or moral grounds to sanction and intervene in the affairs of Venezuela and no international laws to support such a meddling. There is nothing in the UN Charter that sanctions meddling in the elections of a foreign country, and nothing in the Venezuelan constitution that legitimizes self-appointed presidents. Venezuela is not a threat. Venezuela is not firing missiles at the United States, attacking US allies or invading the US with troops.

To be clear, the Maduro government has failed to fix the economy. But that does in no way give justification to the US government to turn the situation from bad to worse. The US and its allies have no right whatsoever to interfere in Venezuela’s affairs. Not only is their regime change illegal and morally wrong, it has proved to be disastrous. Any doubters should ask the United Nations.

In the meantime, the so-called US aid is fake news. This is the same Trump administration that imposed travel ban, imprisoned immigrant mothers and their kids, and left Puerto Rico for dead after Hurricane Maria. It is mad to think even for a second that Trump now does actually care about the Venezuelan people.

At any rate, Venezuela is affected by the outbreak and it should be resolved only through national dialogue and international assistance.

This very real and very daunting task needs help from the international community – not foreign interference or military invasion. Venezuela needs help and only its people can determine their own fate. This is what the US should come to understand with regard to more than a dozen other nations to modify its policies accordingly.