“Iran Could Go Beyond Borders to Respond to Threats”

TEHRAN (Basirat) :A top Iranian military official says Tehran’s response to threats could go beyond the country’s borders if need arises.Deputy Commander of Iran’s Islamic Revolution Guards Corps (IRGC) Rasoul Sanaei-Rad has, in an interview with Basirat.ir, weighed in on the IRGC’s missile attack on terrorists’ positions in Syria 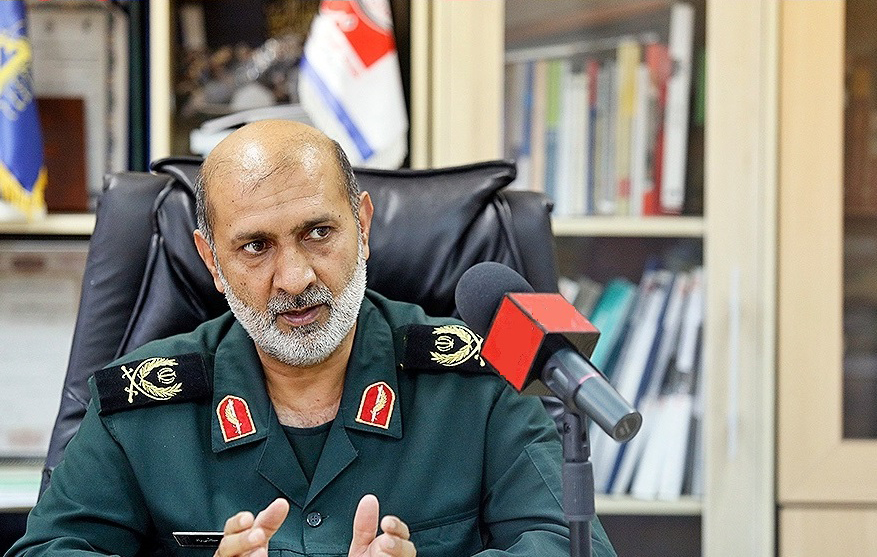 Deputy Commander of Iran’s Islamic Revolution Guards Corps (IRGC) Rasoul Sanaei-Rad has, in an interview with Basirat.ir, weighed in on the IRGC’s missile attack on terrorists’ positions in Syria. The full text of the interview follows:
Syria’s Deir ez-Zor region is one of the strongholds of Takfiri terrorists who, supported by certain regional and extra-regional countries, seek to promote Islamophobia and erode the power of Muslim nations, and are regarded a cancerous tumour in this part of the Muslim world.
Deir ez-Zor lies on the Syrian border with Iraq, benefits from the Euphrates water, is populated by several communities and has various natural features, making the region an ideal place to accommodate terrorists’ command headquarters and logistical equipment and be used as a base for militants, especially when terrorists come under pressure in Mosul and Raqqa and have to retreat.
On June 18, 2017, just days after the Tehran terror attacks in which 18 Iranian citizens were killed by two terror teams at the mausoleum of the late Imam Khomeini and parliament building, the IRGC fired several missiles from missile bases in two western Iranian provinces of Kordestan and Kermanshah striking targets in Deir ez-Zor. The move was not only aimed at avenging the blood of those martyred in Tehran terrorist attacks, but served as a slap in the face for the terrorists’ masters, sending the message to their regional and extra-regional supporters that Iran will leave no threats and follies by the enemies unanswered. He said responding to threats will not be limited to measures inside the country and use of military personnel.
The IRGC’s missile operation, the busting of the terrorist teams behind the recent terror incidents in Tehran, the smashing of several other terror cells in other parts of the country and the apprehension of elements affiliated with them on the back of efforts by Iranian military, security and intelligence forces, coupled with defence and protective measures adopted by the Iranian Armed Forces, send a few messages to Takfiri terrorists as well as their supporters in the region and beyond.

1. The Islamic Republic of Iran has no intention of getting involved in war or confrontation with any country or group. Nevertheless, it will take firm action and give a crushing response if it faces threats or aggression.
2. Response to enemies’ threats and follies will be multi-faceted and will not be limited to measures inside the country’s borders. If necessary, like the recent case where Iran fired missiles at terrorists’ den beyond the country’s borders, Iran will give a firm and crushing response to aggressors and terrorists in any place and at any time necessary.
3. Any act of aggression and unwise move by the enemy will be countered not only inside the country, but their masterminds and sponsors will have to pay the price as well and be punished for their follies.
4. Iran’s missile attack on Takfiri terrorists’ command and logistics centres in Deir ez-Zor shows the country’s determination and defence capability to safeguard the nation’s security and to help other Muslim countries fight and get rid of Takfiri terrorists. Iran will bravely use its capability at any time and in any situation necessary. So, whether or not Iran will continue to show reaction depends on the situation lying ahead as well as the behaviour of terrorists and their sponsors. The IRGC and other Iranian security and law enforcement forces will not hesitate to counter threats. This power will foil enemies’ attempts to impose sanctions and restrictions on the country’s defence capability.
Fortunately, all Iranian people, officials and political groups are standing behind the Armed Forces and contributing to the country’s defence capabilities, and at the same time turning a blind eye to the propaganda campaigns launched by the enemy.