TEHRAN (Basirat): In a meeting with the guests participating in the 13th Session of the Parliamentary Union of the Organization of Islamic Cooperation Member States (PUIC), Leader of the Islamic Revolution Ayatollah Seyyed Ali Khamenei stressed that the Muslim world must explicitly and outspokenly declare its stance and statements on fundamental issues, and noted “Palestine” and “Unity in the Muslim World” are among those key issues. 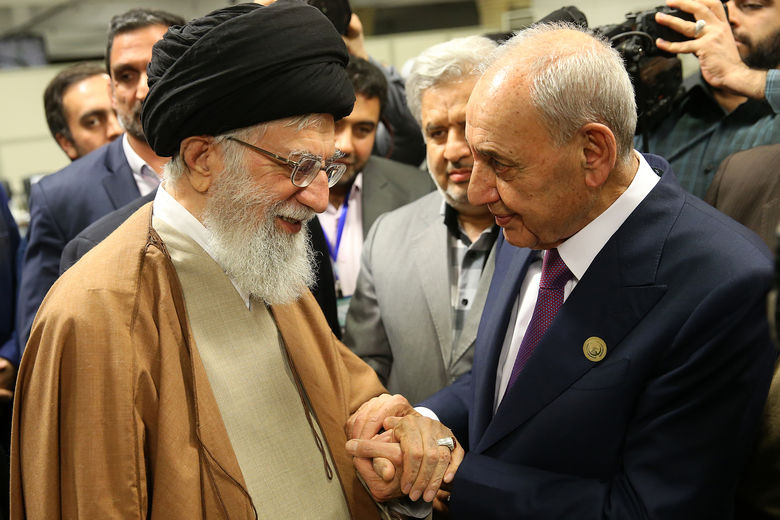 "One of the main and very important issues of the Muslim world is ‘endeavoring to achieve scientific progress,’ and the experience of the Islamic Republic showed that it is possible to promote one’s scientific rank and stand on the frontiers of science in important sectors through making efforts and reliance on the youth.”

The Leader pointed to the religious and historical responsibility of Muslim countries and states regarding the important developments unfolding in the world, saying, "The world of Islam must play a role in important and fundamental issues today and not allow the bitter experience of the past decades and the dominance of powers and its long-term consequences to reoccur.”

Ayatollah Khamenei touched upon the raising of issues of Myanmar and Kashmir in the PUIC conference and, at the same time, neglecting to address the very important issues of Yemen and Bahrain at the event, adding, "Fundamental issues of the Muslim world must be discussed explicitly because through explicitness, it is possible to set trends and influence public opinion as well as the elite across the world.”

The Leader of the Islamic Revolution stressed that it is possible to break up the Western propaganda empire, reiterating, "It is possible to defeat the Zionists in soft war just as they were defeated in hard war and in Lebanon and were forced to admit it.”

Ayatollah Khamenei said the issue of Palestine takes precedence over all other Muslim world issues and said, "In the issue of Palestine, three incidents have occurred, namely ‘the occupation of land,’ ‘the mass expulsion of millions of people’ and ‘a massacre and major crime against humanity,’ and this oppression is unprecedented in history.”

He said defending Palestine is the responsibility of everyone, and stressed, "It should not be assumed that confrontation with the Zionist regime is useless; rather, by God’s grace and favor, struggles against the Zionist regime will bear fruit, just as the resistance movement has made progress compared to previous years.”

The Leader of the Islamic Revolution added, "There was a day when the Zionists chanted the slogan of ‘From the Nile to the Euphrates,’ but now they have been forced to erect a wall to protect themselves.”

Ayatollah Khamenei reiterated, "Doubtlessly, Palestine is a collection and history ‘from the [Mediterranean] Sea to the [Jordon] River’ and al-Quds is its capital and it is impossible to alter this reality.”

He said the Americans have gone too far by adopting that measure recently concerning al-Quds (Washington’s decision to recognize al-Quds as the Israeli regime’s capital.)

"They will not be able to do such a thing and their efforts will be in vain,” Ayatollah Khamenei noted.

The Leader of the Islamic Revolution reiterated, "The governments in the region that are helping the Americans and are cooperating with the Zionist regime to counter Muslin brethren are committing outright treachery as the Saudis are doing.”

Ayatollah Khamenei described "Unity in the Muslim World” as another important issue and said, "We believe that unity in the Muslim world, which enjoys a huge population and plentiful facilities and a very crucial status in the world, can pave the ground for the formation of a great and influential power and we have even told those who show overt hostility against us that we are ready to deal with them in a brotherly manner, even though they do not have this approach.”

He stressed the need for synergy among Muslim states, reiterating, "Disputes, wars and bloodshed in the Muslim world, whose main cause is the Americans and Zionists, should not be allowed to pave the way for the creation of a safety margin for the Zionist regime.”

The Leader of the Islamic Revolution described "making endeavors to achieve scientific progress” as one of the very important issues and requirements of the Muslim world, adding, "Using science, the Western world secured international power and wealth and dominated the world, but because it did not have faith and its grounds, the science led to oppression, hegemony and exploitation; therefore, the world of Islam must work toward achieving scientific progress to break free from this domination, and it is possible to do so.”

Ayatollah Khamenei pointed to the successful experience of Iran on the issue of scientific progress, reiterating, "Islamic Iran, through reliance on its youths and at a time when it was under sanctions, managed to stand on the frontiers of science in important sectors, whereas it was lagging far behind in those areas before.”

The Leader of the Islamic Revolution pointed to a fact, namely, "the need to expose the mendacious claims of the Greatest Satan, i.e. the US.”

Aaytollah Khamenei pointed to the US claim that it is advocating "human rights,” saying, "The individual at the helm in the US today declares the stances of this country very explicitly and nakedly; indeed, his predecessors also maintained these stances, but they would not declare them so explicitly and the textbook example of this stance is his recent remarks about Africa and Latin America and other races, which is a case of human rights violation; therefore, these false claims must be unmasked.”

He said one of the other untruthful claims of the US government is the issue of combating terrorism, adding, "The Americans chant slogans of fighting terrorism while openly supporting the terrorist Zionist regime and furthermore, based on the admission of the sitting US president during his election campaign, they were the main reason behind the creation of Daesh and supported Daesh to its final breaths.”

The Leader of the Islamic Revolution stressed, "By stating the truth and exposing the mendacity of these claims, trends should be set and the public opinion and elite should be influenced.”

Ayatollah Khamenei underlined the need to follow up on the points mentioned in the final resolution of the PUIC conference and help them be realized, saying, "What we recommend or insist on are cases that we ourselves have carried out in practice and achieved a [positive] result.”

He cited the resistance of the Iranian nation against the enemies’ economic war as one such instance, adding, "‘Sanctions’ are one part of this economic war, which they perpetuated for long years and turned up to the max and it also exists today; however, the Iranian nation resisted and was not defeated and today it will turn these sanctions into a means for blossoming.”

The Leader of the Islamic Revolution described "religious democracy” as another successful experience of the Iranian nation and facilitator of spiritual and material growth and stressed, "With the help of God, the Iranian nation has thwarted these US plots so far and will foil them henceforth as well.”

In conclusion, Ayatollah Khamenei expressed hope that "the successful and growing movement of the Iranian nation would become a motive for the strengthening of the Muslim community against hegemonic powers.”

Prior to the Leader’s remarks, Iran’s Parliament Speaker Ali Larijani presented a report on the 13th Session of the Parliamentary Union of the Organization of Islamic Cooperation Member States (PUIC), saying, "In this conference, the speakers of the parliaments of Islamic countries attended to issues such as the development of economic and commercial cooperation, terrorism and the US role in creating security challenges in Muslim regions and the aggression against al-Quds and stressed that Quds belongs to the historical Palestinian land.”

At the end of this meeting, the participants in the conference met and spoke with the Leader of the Revolution in person.