TEHRAN (Basirat): The EU has made a big mistake by entering into talks with the US over the Iran nuclear deal, instead of holding its ground and announcing it will never accept US calls for renegotiation of the pact. 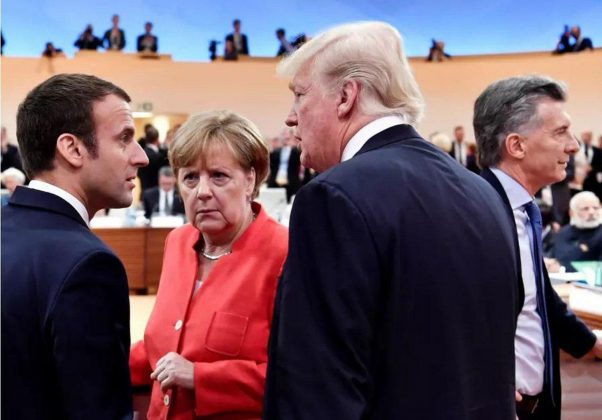 The European Union and particularly top European powers have failed a test to contain America. This was evident during the presidency of Barack Obama, when the US Treasury Department was unfaithful to the deal, and during the presidency of Donald Trump. The evidence suggests the Trump administration is preparing to walk out of the Iran deal. The nomination of Mike Pompeo as the US secretary of state and appointment of John Bolton as national security advisor sent meaningful messages from Washington to Europe: the US is willing to walk out of the Iran deal as soon as possible.
Trump has set four ridiculous conditions for staying in the deal: Carrying out inspections of Iran’s military sites, removing the so-called "sunset clauses” of the deal, adding articles to the deal restricting Iran’s missile program, and limiting Iran’s regional activities. Without a doubt, the Islamic Republic will accept none of these conditions and efforts by the European Union will do the West no good in this regard.
In recent days, the Europe has been a scene to many developments related to the pact. France, the UK and Germany are trying to persuade their EU partners into supporting new sanctions against Iran aimed at saving the nuclear deal. But Italy has doubts these sanctions will prevent the US from exiting the pact.
According to a Reuters report, Paris, London and Berlin have held a meeting with ambassadors of other EU member states to win their support for approving new sanctions in April. The meeting was held behind closed doors in Brussels. A while ago, western media reported joint efforts by the three European powers to impose sanctions on Iran over its missile and regional activities. The three countries claim the move will help convince the US to keep the deal in place. However, such an argument is unacceptable even within the EU.
Italy, supported by Spain and Austria, has opposed imposing travel ban and asset freeze on 15 firms and persons connected to Iran’s missile program and presence in Syria. Some European countries believe these measures won’t be enough to convince Trump to stay in the deal and will endanger growing trade relations with Iran. According to the EU rules, the imposing of economic sanctions requires the approval of all EU members.
The fact is that since early August, the Trump administration has held lengthy talks with Europeans on altering the JCPOA to the US benefit. The Europeans made their first mistake in August. French President Emmanuel Macron announced in August that he favoured talks with Iran on the country’s missile program and the fate of Iran’s nuclear program after the end of temporary restrictions set by the pact. The annual meeting of the United Nations General Assembly in New York in September was the scene of close consultations between US and European powers. Seemingly, one of the top goals of Washington in the talks is to the share the cost of the termination of the deal among the US and its European partners. The behaviour of European powers in the face of US insistence on altering the deal and their inactivity has enabled the White House to leave the EU with two options, whether to help change the deal or see the pact cancelled. This is while the three countries, who played a big role during the nuclear talks between Iran and P5+1, should have avoided entering into talks with the US on the deal.
Trump has asked Europeans to fix the so-called flaws of the deal by May 12, when he should decide whether to extend waivers of Iran sanctions. As it was pointed out, many international analysts believe the appointment of John Bolton, the neoconservative politician who is antagonistic towards the deal, and the nomination of Mike Pompeo are signals that the US will pull out of the deal. In other words, the talks between the US and Europe in the past eight months have borne no fruit. Washington is preparing to walk out of the pact and Europeans seems to be disappointed with Trump.
The recent report by Guardian testifies to this fact. Kelsey Davenport, director of non-proliferation policy at the Arms Control Association, has pointed to the replacement of National Security Advisor Herbert McMaster and said, "I think the Bolton appointment is another nail in the coffin of the Iran deal.”
Davenport stressed the need for the other sides of the JCPOA to stay united in the face of the US bullying.
"I think it’s critical that the EU, Russia and China, and other states too, try to hold the deal together. Failure to support the JCPOA would be a capitulation to the US position, but would also send a dangerous message that risks non-proliferation norms more broadly,” she said.
A senior European diplomat who didn’t want his name disclosed told the Guardian, "We have given up hoping. He wants to tick the JCPOA off, another thing he said he would do in the campaign that he did.”
The biggest mistake of the EU was engaging in talks with the US on changing the deal, with Macron and UK Foreign Secretary Boris Johnson on the one side and Trump on the other. The European Union and European powers have not only failed to keep the deal in place, but they have thrown into question their prestige and credibility in the international scene.
Standing up to the US bullying was a test in which the EU has so far failed. Undoubtedly, continued inactivity of the EU in case the US pulls out of the JCPOA will further damage the credibility of Europe in the international scene and in the eyes of world public opinion.