TEHRAN (Basirat): After closing an arms deal with Saudi Arabia worth $110 billion, it makes sense for US President Donald Trump to refuse to say whether slain journalist Jamal Khashoggi deserves justice - just as he won’t say Yemen and Syria are entitled to peace or ending the twin wars is the best way to ensure their people have the security they need. 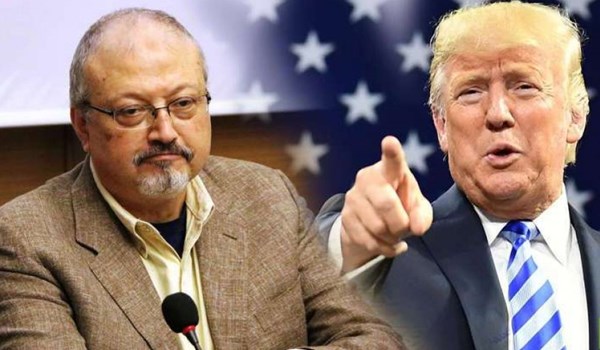 Instead, he has announced the $110 billion deal will go ahead, even extend up to $350 billion over 10 years, Saudi Arabia is US arms dealers’ most important client, and it is Washington’s No. 1 ally in the Middle East region, particularly in the forgotten military aggression against Yemen, which has claimed the lives of thousands of people, most of them civilians.

In his view, Saudi client state has every right to murder its critics or incessantly pound Yemen or support terror proxies in Syria. Riyadh cannot and should never be punished for its crimes or be allowed to fail to reach its criminal goals despite suffering great expense; and the Saudi regime is free to sponsor Takfiri-Wahhabi terrorists fighting against Syria, which has left hundreds of thousands people dead and millions more displaced.

In the president’s view, the White House has every right to continue its brutal war on Yemen or help terrorists affect regime change in Damascus; dismiss the de-escalation zones agreement reached between Iran, Russia and Turkey; and strike as many civilians as possible in terror-held areas. There is room for very minor shifts in this excessive policy that make sure war-party Washington does not harm the most vulnerable allies. Especially for terror proxy forces in need, the Trump White House does not want to leave the "moderate” goons without training, weapons and munitions.

Trump wants to make sure the deal will never hold, just as the way he is making sure the Saudi-led, US-backed war on Yemen will carry on. His massive arms deal with Saudis is merely a set of long-term policies that reflect his war priorities. He embarked on a racialized course of scapegoating and refused to rule out more sanctions against Iran and Russia as part of that process. He wants to have an all-out confrontation. It’s good for business and it creates American jobs.

Though Trump is unable to help regional allies to regime change Syria and Yemen, he did succeed in destabilizing the region for many years to come. His deplorable Saudi arms deal has effectively cast a shadow of war over the millions of people living in the Middle East and North Africa without the hope for permanent peace and tranquility. This shadow accompanies them wherever they go in their daily lives. This divisive arms deal not only serves to incite fear of war; it also helps to kill justice and to exacerbate regional insecurity and chaos, and most importantly, mistrust among Muslims, even among Saudi Arabia’s own allies.

Trump’s discursive policy of weaponizing allies has inspired sectarian warfare as well because his administration hasn’t hesitated to carry out its threats against Iran and its close allies. In its first months, the Trump administration imposed travel ban on Muslims, particularly Syrian refugees, that despite international outcry is still ongoing. Half the Muslim people applying for visa never get to travel to the United States. And the results have been predictable, as an eroding trust in so-called "American democracy” and "American dream” across the country. It’s not surprising that Trump’s Islamopbobia campaign has undermined Muslim trust and instigated resentment, as many pundits have attested.

This has made the region highly vulnerable to exploitation as attempts to resist American hegemony and wars of aggression and deceit have often been met with threatened military attack and coup – even in the case of Qatar which wants better ties with Iran. So it is no coincidence that, over the past few months, the growing insecurity and chaos has taken place while the region has become increasingly militarized and while discussions of ending the twin wars on Syria and Yemen have been frequently linked to Iran leaving these two allies to their own devices.

This president and his pro-Israel and pro-Saudi cabinet plan to take the profitability of the permanent war on terror, Islam and suchlike to new heights by giving massive arms to the Israel-allied despots of the Persian Gulf and by imposing further sanctions against Iran and Russia. Trump cannot maintain this divisive foreign policy and crimes-against-humanity complicity without escaping international condemnation in the noisy drumbeat of warmongering, scapegoating, and perverting of justice.