TEHRAN (Basirat) : British Ambassador Rob Macaire, who was arrested briefly by Iran during demonstrations in Tehran on Saturday afternoon, was summoned to the Foreign Ministry on Sunday afternoon. 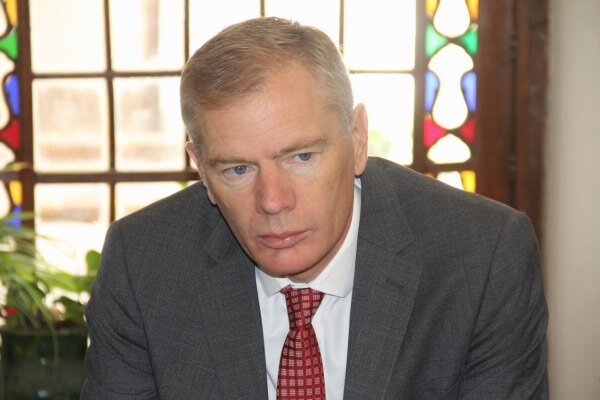 The British ambassador was summoned for his “unconventional behavior and presence” in the illegal gatherings, the Foreign Ministry said.
The ministry said he was summoned to hear Iran’s official protest to him and the British government.
The British diplomat was reminded that his presence in illegal gatherings has no conformity with his responsibility as his country’s political representative in Iran and that his behavior is in contrast to the 1961 Vienna convention on diplomatic relationship, the ministry said.
It added the British government should provide answers in this regard.
Ambassador Macaire was accused of "inciting" the protesters in front of Amir Kabir University.
Iranian Deputy Foreign Minister for Political Affairs Abbas Araghchi said Ambassador Macaire was temporarily arrested for participating in the “illegal gathering” in Tehran.
“He wasn't detained but arrested as an unknown foreigner in an illegal gathering. When police informed me a man's arrested who claims to be UK Amb, I said IMPOSSIBLE! only after my phone conversation w him I identified, out of big surprise, that it's him. 15 min later he was free,” Araghchi tweeted on Sunday.
The comments came in response to a recent tweet by head of European Union foreign policy Josep Borrell who expressed concerns over the envoy’s “temporary detention”.
“Very concerned about the temporary detention of the UK Ambassador @HMATehran in Iran. Full respect of the Vienna convention is a must. The EU calls for de-escalation and space for diplomacy,” Borrell wrote.
On Saturday, a group of students had gathered inside the university to voice their protest after Iran officially announced the downing of a Ukrainian passenger plane by mistake on Wednesday morning.
The Armed Force General Staff said the air defense unintentionally shot down the passenger plane amid the highest level of readiness because of a possible military strike by the U.S.
Iran has said those responsible for this “disaster” will be brought to justice.
Source:TehranTimes
Iran's reaction to Trump's tweet: Don't dishonor our language
Iranian MP Urges Expulsion of UK Envoy
Iran Calls Britain’s Move to Detain Oil Tanker ‘Piracy’
Tags: basirat ، British ambassador ، Macaire ، Abbas Araghchi
Error Report
0