TEHRAN (Basirat) :IRGC spokesman said the missiles fired at ISIL positions in Syria's Deir Ezzor in retaliation for two deadly attacks in Tehran was just a fraction of Iran’s punitive power against terrorists and enemies. 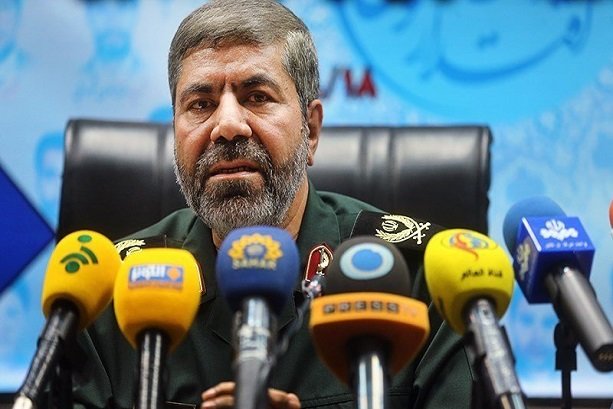 Spokesman for Islamic Revolutionary Guard Corps (IRGC) Brigadier General Ramezan Sharif in a televised interview with IRIB on Sunday night said that reliable information confirmed that missiles fired at ISIL commander bases and arms facilities in Deir Ezzor in retaliation for the June 7 attacks in Tehran have successfully destroyed their targets.
The operation was carried out by using ground-to-ground, mid-range missiles from bases in provinces of Kermanshah and Kurdistan, western Iran, killing a large number of terrorists and destroying weapons, according to the IRGC statement released following the operation.
"The fact that the missiles have been fired from two Sunni-majority provinces carries the message of unity among all Iranians against terrorists,” Sharif stressed.
He went on to add, "international and regional sponsors of terrorism need to understand the warning message of Iran’s missile operations.”
Meanwhile, Iranian Parliament's General Director for International Affairs Hossein Amir-Abdollahian said the missile attack against Takfiri positions in Syria was "just a soft warning”.
ISIL claimed responsibility for the June 7 attacks on Iran's parliament and the Mausoleum of Imam Khomeini that left 17 people dead and dozens of others injured. Senior Iranian officials have also highlighted links tying the terrorist operation in Iran to Saudi Arabia.