TEHRAN (Basirat) : Iranian President Hassan Rouhani praised the country’s self-sufficiency in arms industry and said the Islamic Republic’s military power, which is incomparable to the years before the 1979 Islamic Revolution, guarantees peace. 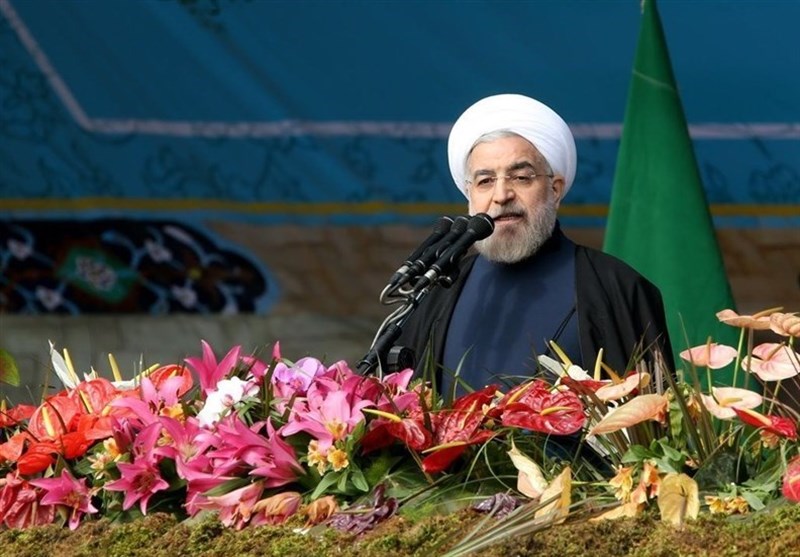 “It is our (military) power that protects peace,” Rouhani said, addressing a large number of people, who had gathered in Tehran’s Azadi Square on Tuesday to mark the 41st anniversary of the Islamic Revolution.
“I appreciate the defense industry of the country that has multiplied our Armed Forces’ power over the past years,” he said, adding that the Islamic Republic’s military power today is much more than one year ago.
“Before the revolution, 95 percent of our arms and (military) equipment were imported and only 5 percent was built inside the country but today, all our needed (arms) are produced domestically,” the president went on to say.
The remarks came as countrywide rallies were held in Iran on Tuesday to mark the anniversary of the Islamic Revolution’s victory.
The Iranian nation toppled the US-backed Pahlavi regime 41 years ago, on February 11, 1979, ending 2,500 years of monarchic rule in the country.
Iranian officials have repeatedly underscored that the country will not hesitate to strengthen its military capabilities, including its missile power, which are entirely meant for defense, and that Iran’s defense capabilities will be never subject to negotiations.
Back in February 2018, Leader of the Islamic Revolution Ayatollah Seyed Ali Khamenei called for efforts to maintain and boost Iran’s defense capabilities, hitting back at the enemies for disputing the country’s missile program.
“Without a moment of hesitation, the country must move to acquire whatever is necessary for defense, even if the whole world is opposed to it,” Ayatollah Khamenei said at the time.
Source:Tasnim
President Blames US for Ukraine Plane Crash in Iran
The region's turbulent situation is due to the corruptive presence of the U.S. and its cohorts
Rouhani to U.S.: ‘Your foot will be cut from the region’
Tags: basirat ، Hassan Rouhani ، 1979 Islamic Revolution ، countrywide rallies ، Pahlavi regime ، Ayatollah Khamenei
Error Report
0